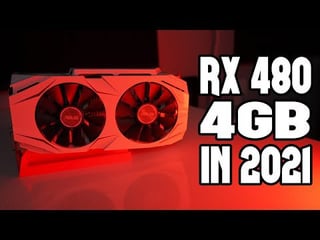 Revisiting ? As if there was a worthwhile upgrade option at that price point even before AMD abandoned it. People are holding on to their 480s, re-pasting, burning incense and sacrificing small creatures to keep them alive for another year or two.

Undervolting and -clocking would work better I think.

Squeaky died for nothing ?

Indeed I have that RX 480 model (4gb and everything). It still works fine-ish in 1080p @ ~75fps, though it already struggles to reach 60 fps in many titles. Had to repaste it a couple of years ago and tweak fan curves.

Given the current times, it still strolls along until better prices (do not die on me!!!1)

No kidding... I play 6D chess on wattman to keep it at a reasonable temperature AND fan speeds so neither the chip nor the fan dies (my old gtx 460's fan died around this age). 1130mhz is not the pro gamer move but slow is better than fucking dead because it's not like I can afford a replacement in this market...

If I had known I would still be using it five years later, I would have sprung for the 8gb version. But back then, I thought it was crazy to pay more than $200 for a graphics card.

I've been running an RX 570 for about 3 years and yet to see 4GB become an issue.

TL;DW still capable. Can run demanding games at playable framerates if you turn down settings at 1080p.

E: on a more anecdotal note, my old (reference, even) 480 4gb is still going strong in my wife's machine. She plays games more casually and doesn't necessarily care as much about pretty graphics or ultra-high franerates, and it will probably continue to serve her well at least until I feel it's time to replace my 5700 XT, at which point I upgrade and she gets the 5700 and the cycle begins anew

Whoa man you need to get rid of that 5700xt today if you’re a gamer and not a miner.

Nah. I'd rather not be without a GPU for a while, my system is finally stable, it still works well, and I can't front $1000 right now. That money would be better spent fixing my car.

What are they going for?

Was that a true launch reference 4gb 480? There’s a good chance it’s actually 8gb just flashed to 4gb if you bought right near launch.

I flashed the bios way back when and started getting image artifacts that went away when I flashed back. I think mine actually had some bad vram chips that were in the disabled half.

Cyberpunk I was going a mix of high and medium settings

I have an MSI 480 4GB that I got for $200 during Black Friday sales in 2016. Other than having to fine tune some settings, it still runs most everything today at 1080p and 60+ frames. The only thing I regret was not springing for the 8GB version, but I was poor and wanted to upgrade from my Sapphire HD 6870.

For the past year, I've been wanting to upgrade to a 6800xt but that has been... difficult, as we all know.

Until I can upgrade, I'll keep praying to the Omnissiah and rubbing the 480 with sacred oils... Don't want to anger its machine spirit...

In some modern games thats all the card is really capable of with reasonable framerates regardless of the 4gb or 8gb versions. Atleast in the 470s case. Still damn impressive. The 470 4gb i got new for a steal basically just before the mining boom when they came out. It was like $100 difference between 4gb and 8gb. Zero regret saving that. Sucker still goes and runs my bedroom pc. Il play older and relaxed titles i dont need high fps at 4k.

voodoo 3 of a generation.

That cpu might be better fit with 3gb 1060 as long as the game doesn't require more than 3 gigs of vram. CPU can't keep up with the 480 but it'll let you play with better textures. your call. I'd prolly use the 1060 since it's a good balance.

On the other hand, the RX 480 likely has less demand on the drivers.

Aren't these mining cards now? Wouldn't it be better to sell them for more and get a newer card?

Not the 4GB ones.

get a newer card

I haven't watched the video yet, but I can tell you from first hand experience this GPU is still one of the best deals for 1080p gaming. Nothing released in the last couple years comes close to the value at that resolution.

And overall, it is an obsolete graphics card, but definitely capable to handle older games or modern well-optimized games.

I'd disagree with your definition of "obsolete," but otherwise I agree.

GTA V is currently one of the most popular PC games, it easily breaks 100,000 concurrent players on Steam alone.

Also, the RX 480 is not much older than GTA V. It was released only about a year after GTA V came to PC.

GTA V is still a popular game with vast open world and beautiful graphic despite being 8 years old. Set Max setting and 4k resolution and see for yourself.