I’m pretty new to fan curves and have 0 experience. I have a Sapphire RX 480 and every time I boot up a game, it’s like a jet engine, regardless of its percentage use. Any idea on how I can use it efficiently and correctly?

Hey, the 470/480/570/580 can undervolt quite a lot. Undervolting is a process of tuning GPU parameters to make it use less volts, which results in less power used and less power used means less heat and temps. This in turn means slower fans speed obviously.

I'm not going to repeat the whole process of undervolting here but you should find a lot of guides and videos how to undervolt your card.

My RX570 was able to do 1300 MHz at 950 mV. I think your RX480 should be able to do around 1200-1300 MHz at somewhere between 900-1000 mV. I think it's best to find guide/vid online and copy settings and then play with fan curve a bit. I use MSI Afterburner for OC and fan curves, here is my setting that I use for most cards and tune the base speed depending on which is acceptable and unhearable for me.

There's no point lowering the core voltage below 1000mV as the memory controller voltage is derived from it and that'll be 1000mV when the Vram is clocked up, forcing the Vcore to be a tiny bit higher than, around 1012mV.

edit and just noticed the OP linked a 4GB model with that same lower clocked vram as well. As you were!

Totally agree with undervolting here. In my experience with my old RX470, undervolting avoided thermal throttling better than running fans at full load..

You can try this free tool

https://github.com/Rem0o/FanControl.Releases
and play around with fan curves until you find one which suits you needs.
ID: gtostyo

Rem0o FanControl is really amazing, the best SpeedFan replacement out there for linking fans together, I use it to link my Case Fans to GPU and an Override when I'm heavy on CPU.

I personally use Argus Monitor, which was already a LOT better than speedfan with fully fleshed out features. If you've tried it what would you say is the difference between these 2?

Is the 480 a reference card? if so then its going to be loud af no matter what you do. You can minimize it somewhat but it will still be loud.

Even the aftermarket version were somewhat loud aswell.

I don’t really understand what a “reference card” is. Here is the link to my GPU,

Ahh ok no worries, ref card is those cards that come out first. the ones with the single fan on them. They also get called blower cards.

Anyway your one is an aftermarket one.

What does the rest of the setup look like? Case, fans, CPU etc What does your temperature look like?

Sounds like your GPU is running hot to begonia with

I guess you should post a screenshot of both current temps and how the fancurve is optimized.

Only time I can think of when the GPU fans rev up immediatly when Starting a game, is if the game has unlocked frames in the main menu and you get 1000+ FPS.

One whole our of mining? A WHOLE HOUR? mining really doesn't hurt your card after an hour, if it does at all haha

I actually prefer to use a step-ladder like ramp-up rather than a curve. Using a curve makes the fan constantly change speed (and pitch), which makes it more audible.

Just be sure to not set your steps at the temps where the card does thermal throttling so it doesn't ping-pong between two different fan speeds. i.e. if your card lowers clocks at 75C, then I'd set the first fan ramp-up at around 70C. Then if the second thermal threshold is 85C, ramp up again at around 80C. I try to avoid 100% fan and only place it just before TJMax as the last ramp-up .

Using a curve makes the fan constantly change speed (and pitch), which makes it more audible.

With MSI Afterburner's fan curve, you can both create as many points as you wish, to smooth out the curve, and set a hysteresis value. My understanding of the latter is that it prevents constantly changing of fan speed by requiring the temperature to increase or decrease by the set value in degrees first. For example, a value of 5C means that the temperature would have to climb or drop by 5C before the fan speed is changed again. Basically, it sort of forces a curve to act like a step ladder and is much simpler to adjust (just change the hysteresis value to change the size of each step, rather than changing all the point on your fan curve).

I mean what I want is pretty much doable with any fan curve.

What I mean is instead of drawing a sloping line (or curved line) that rises gradually along with temperature increments, what I'd do is draw a flat line at 20% all the way from 0 to 65C, then immediately jump up to 60% at 65C then stay flat at that level until maybe 75C, then another vertical jump to 80% from there. I'll just be using the fan "curve" to draw a step function rather than a gradual ramp-up.

I have a ROG Strix RX480 8Gb and since I got it whenever I would crank the setting in games to max it would stutter and drove me crazy. I've had the card for 6 months and just assumed I had to run my games at medium settings. I noticed the other day that my core frequencies would jump all over the place, which did weird things with the fans but my temps never really got above 67. On a hunch I redid my thermal paste and the frequencies are rock solid, my temps are rock solid, my fans are quiet and all my games run great at max settings 2560x1080p. It's like having a new card.

I guess best advise would be to look up some you tuber that has done fan curves for your card. I have a rx 480 but its a full/3 fan card, so it will be different even though mine is loud also. 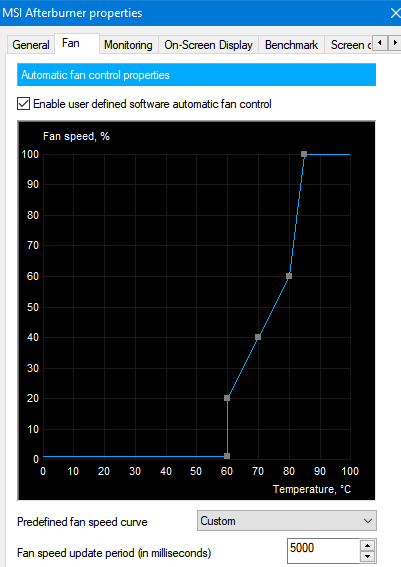 If you want to optimize for noise level, lower the points on the curve to the highest fan speeds that your ears are happy with at each temperature. For example, up to 50C (i.e. regular desktop use), set it just before the point where you can hear your GPU over the other fans in your case. That's probably somewhere between 20-40% fan speed. What you really care about is the noise during games, though.

You say that, during games, it sounds like a jet engine even though the max temperature is only 72C. You probably have the fan speed set to 66% or higher over 70C. What you have to be willing to do is trade an increase in temperature for a reduction in fan speed/noise. Try setting your curve so that the fans don't hit 66% until the temperature hits 80C and watch your temps. If they're still a ways from 80C, then lower the percentage even further. See how far you can lower the fan speed until the temperature starts peaking at 78-79C. If you're still unhappy with the noise, while you can move the point down and to the right to allow the temperature to creep into the low 80s, it'd probably be better to undervolt and/or re-paste at that point.

Second, what max temperature you are targeting. I use 70ºC.