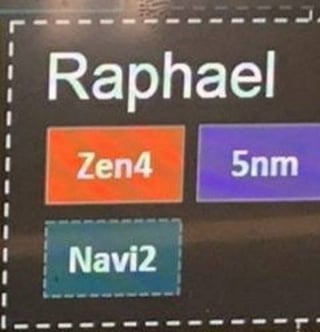 Yeah. And as I've pointed out before, it's a dotted box unlike all the other iGPUs. I don't think it'll be there on all SKUs, but an option for some.

Interested to see how the segmentation will work out. Will we be looking at two seperate I/O dies, one with an iGPU and one without, or just the one I/O die with the iGPU disabled?

If they could add iGPU as one of chiplets elements then there will be just SKU's with iGPU. But due to space available on chip for sure Highest ones will not have the iGPU.

From a purely theoretical standpoint that's another possibility. However, taking into consideration the rest of the product stack that doesn't make sense IMO. They could just ship Phoenix/Rembrandt (Zen 4/Zen 3+ mobile APUs) on the desktop socket instead.

The latter has 12CUs which is already quite a lot for DDR5 bandwidth, even when talking about DDR5-6400, and should be able to properly compete against current entry level GPUs (i.e. 1650 to rx570 levels of performance).

But due to space available on chip

That could go either way. We ain't got a clue on 5nm zen4 core size, it could be smaller or just same size with more transistors. We know that the ccd's probably gonna retain an 8 core design so amd might not put more than 2 core chiplets on the package. It's possible for 16 core sku to have igpu though that probably ain't important because most apu market is not gonna be on 16 cores

It could be an extremely weak IGPU on their main desktop parts if its going onto the I/O die that is only 2-4 CUs or something just so you have basic output.

I doubt they would make two seperate I/O dies per cpu.

That's what I'm expecting. More important than the CU count would be getting the media and display engines on package.

If you cared about pure iGPU performance, Rembrandt and Phoenix would make more sense anyway.

Agreed. The new I/O die is rumoured to be 6nm, and that should fit a basic GPU without taking too much space.

My guess is they will be on the APU units only and basically available to none. You still can't find any real source of the latest AMD APU in stores.

You still can't find any real source of the latest AMD APU in stores.

This is because they are not sold in box packaging. Only tray for OEM system builder. This is the reason why you can only buy the 4xxxG from aliexpress or ebay. Or you can buy a prebuild obv.

It depends if it all fits in the same die easily.

It's the same cost to make a silicon die of the same size regardless of what features are there. That's why they make all 8 core CCX's and based in what works they but them for 4-8 cores.

But, I'd be surprised if they can fit that into the I/O die. More likely it would be one CCX for the CPU and one CCX for the iGPU. They jave been talking about making everything CCX based.

If the rumors are true of the IO die being moved to 6nm, would likely still be fairly large but I'd assume they'd want to keep it all together to reduce latencies.

It may also explain why AMD is so reluctant to launch its 4700G/4750G for the DIY market. Eventually, those will be replaced by high-performance CPUs with built-in GPUs

Yea no probably not. The zen2 desktop apu's 2 gens behind. No reason amd would cancel a mid 2020 product for a mid 2022 product. Videocardz ain't doin great at theories but rumors sure

Their articles are so weird. They somehow feel the need to add completely baseless and outlandish speculation to every leak.

Typical thing people do when their content or story is thin. They feel like they need to spice it up a bit often at the cost of truth.

Or when your word count is so low that you add things needlessly in order to increase your word.

Yeah, using that logic they might as well never release another apu cause they could always do it next year.

So Warhol is Zen3 with new IO die that can handle way faster DDR4 and optional DDR5 with the optional X570F or whatever is called. Like bumping supported RAM configs way higher would give a nice bump in benchmarks if used with such memory which should be a nice stopgap to Zen 4 on a new socket and help with DDR5 market development.

Hopefully there will be motherboards that support USB4 by the time these CPU's arrive. zzzzzzzzzzz

I wouldn't be surprised if there would be a zen4 am4 cpu. This roadmap confirms zen3 + ddr5 with some of the mobile sku's, a ddr4 appropriate io die + zen4 chiplets is not impossible.

At the same time, ddr4 might be seen as too big of a bottleneck at that stage.

Anyone knows if 6000 is supporting ddr5?

We don't know yet, nothing's been formally announced. There's been some rumours that the 6k series might be a Zen3 refresh (Zen 3+) with and updated IO die with support for DDR4 and DDR5 to ease the transition to new platforms, but it's just rumour at the moment.

AMD did something similar a long time ago - I believe the transition from DDR2 to DDR3, but those memory modules had more in common than DDR4 and DDR5.

In general it's assumed that the 5000 series will be the last generation series on AM4, but until a formal announcement is made anyone who says they 100% know is just talking bollocks. We'd expect to start hearing announcements towards the end of this year, AMD seems to be on a 12-15 month cadence at the moment.

Assuming Intel sticks to their plan of launching Alder Lake-S late this year I'd expect AMD to launch Warhol at the same time or sometime in Q1 2022.

When AMD announced they would support 5000 series on pre-500 chipsets they said it would be the last to support those older chipsets. From that I think everyone assumed a move to AM5 including switching to DDR5 at the same time but as you say, it's not formally confirmed yet.

the question is ; will it be a feature on stores shelves?

Integrated graphics might be the only way I'll get new graphics.

Isn't this like the third repost of the exact same news/image?

its not a news

We know that since many month

Why do they keep pushing it. If amd didn't change the zen architecture then it's not a new zen generation, there are a few areas they can get improvements without changing the core, they could change the uncore/io die, they could use a refined process, or they could do. A respin / new stepping to remove some erratas. None of these will change it to zen3+ which isn't on any roadmaps I've seen.

Wasn't that exactly what Zen+ was though? It was mostly just cleanups and manufacturing improvements.

That's exactly what Zen+ was to Zen1. So Zen3+ is possible.

Can someone explain to me one thing though - all those leaks seem to be from the same photo, why not post the whole thing at once instead of feeding us fragments of it?

From zen1 to zen3, the idea was make cpu chiplets that are reusable for servers. This worked ok for a limited amount of cores per chiplet.

5nm density is quite high, so maybe they can fit like >15-20 cores / chiplet which wouldn't really make sense to reuse in terms of desktop pcs.

What would make sense though, for consumer parts, is to make an up-to-10/12(?) core cpu, integrate it with the I/O, give it graphics and use it for both laptops and desktops thus eliminating two lines of manufacturing (consumer cpu / consumer apu-laptop apu).

I think the higher density of 5nm allowing way more cores per chiplet (which would be useless for desktop) might have led to diverging from the strategy that has been implemented up until now.