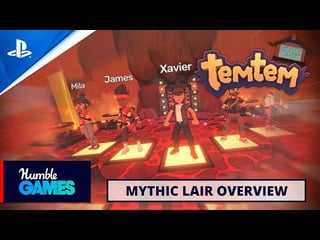 Brilliant game, takes no prisoners though.

Totally mate. Been playing since it’s PS5 release and I have no idea what I’m doing haha

Is this PVE focused? and if there's a PVP, is it forced on you? like people can go and attack you without any notification?

Pvp isn't required but if you replay gym battles the ai acts as if it's a pvp battles which has different rules that standard.

It looks great, especially these raids. Looks like a fresh take on monster collecting games

Stuck in a rut and can’t get off the PC. Maybe this could be the one to drag my ass back to the TV. Feeling a Pokémon itch again.

The best thing about this game is the difficulty. It is actually tough. I remember in Pokemon where you could just walk from town to town and maybe lose one or two pokemon. In TemTem I've yet to make it from one town to the other without getting a team wipe or going back to get my team healed at least once or twice.

I really enjoyed playing this on PC. If you like the old school Pokémon games you will really like it. Gorgeous art style as well.

how have you played 100 hours if its rubbish?

I'd rather hear someone's thoughts if they've played a whole game than from someone with 0.2 hours on record

Someone got there cheeks clapped by a dojo master

That's what it sounds like. They are tough compared to pokemon gyms.

Sorry but no. Unless it's opposite day.

Double battles are more interesting and they added a decent amount of mechanics to differentiate. The story is a bit more mature while still being kid friendly and fun.

The length is pretty good because even with the missing content from future updates it's still a lot.

The game is definitely harder than pokemon. And you can't just use your starter the entire game like pokemon or you will get screwed.

There is also a decent breeding system to get perfect stats though it's hard. You can also refight gym leader in a mock pvp battle where the gym leader gets smarter ai and will do things like swap tems.

Co op is also awesome. You and a friend can play together and each have 3 times instead of the normal 6.

The only downsides imo are

the forced animations/transitions like pokemon has always had ( " a wild xxxxxx has appeared) which imo take too long and get annoying when it's not what you want. This exists in pokemon so it's more of something I wish they improved on.

I really think money is annoying to get because unless you have a good pvp team redoing gym leaders is impossible. That said it's an end game activity mostly and you can get money elsewhere you also can't redo other fights. I wish you could refight trainers.

And finally. There is legitmately a early game wall that is tough to get past because there is no good places to grind and level, which unlike pokemon you really need to do in temtem. The first 2 islands only have mediocre places but the 3rd one iirc is where you can go to a place with high level wild tems and get a crap load of xp per battle.

To be fair it also made me appreciate pokemon a lot more.

Like, I think temtem is a pretty damn good game but it kinda also made me want a pokemon game that's a bit more polished and pushed forward more than it made me want to drop pokemon.

People like to shit on pokemon designs but I think literally every gen needs props for making all of the designs memorable. We have so many pokemon and someone can randomly just bring one up and people will probably know what they are and what typing it has just off of how easy it is to instantly recognize it be how it looks and it's name.

Temtem also kind of made me realize that I 100% just hate rivals who are mean for literally no reason. I think it's because I'm an adult now but I take 0 pleasure in storming a mean rival as much as I just hate reading dialog that I don't like.