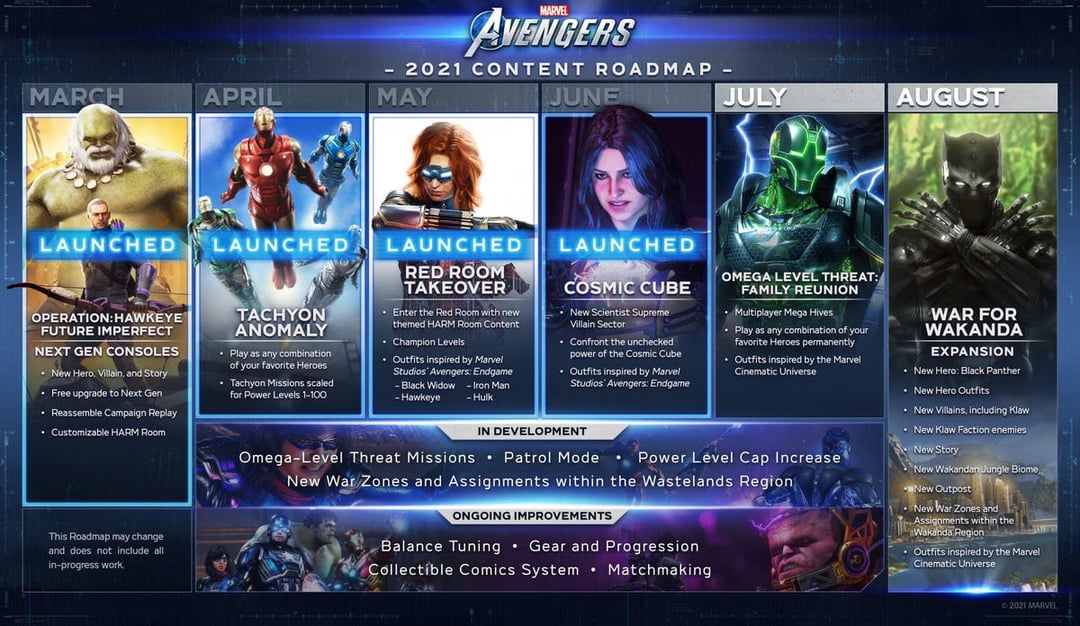 Makes you appreciate how much of an accomplishment Ultimate Alliance was

The game I’m really sad about that got shut down is Marvel Heroes: Omega. Basically, a Diablo 3 for the Marvel universe. They had just about every popular hero imaginable, all with their own custom armor pieces and move sets. It was so much fun to play and I was so sad to hear they were shutting it down. And, now that I think about it, they probably shut down that game so this new Avengers game had a place to shine. I’d much rather have MH:O back then have to settle for this new Avengers game.

I played Marvel Heroes since the beta days, I miss seeing so many heroes in one spot working together to take down the Sinister Six.

The screen was cluttered with so much going on lol

I absolutely loved Marvel Heroes. Played it from beta on PC and switched over to PS4 when I had the option. Easily my most played game ever. I miss it dearly.

Now that is a fun game.

I started playing Ultimate Alliance 3 again recently and I still love it. It's not perfect, but much better than any other Marvel game released in the last several years.

I never played 2 or 3, are close to the quality of the first one?

I only got to play it last year, borrowed the sister’s Switch and bought UA3 and the DLC. Loved how much content was on there. It certainly “feels” different than the first two for some reason, but in a good way. I love all 3. I’m just glad to see the X-Men and Fantastic Four running with the rest of Marvel again; the last few Lego games were fun but obviously lacking.

I wish a 4th one is coming, and hopefully for all platforms. One of my favorite games.

Better than the spider-man games?

Spider-man and miles morales would like a word lol.

The campaign was fun, but all the live service stuff is just crap.

Yup. I come back to it every now and then when they drop new single player story stuff and then leave it behind again. Looking forward to the Black Panther stuff.

"I am altering the deal, pray I don't alter it any further"

That game ended up being such a mess, remember when people were MAD that ps got spiderman as an exclusive character? Lmfao. Its nowhere to be seen!

Waaaaait. Spider-Man isn’t even out on it?? I haven’t played it before but damn that’s not good

If I recall correctly they said he was supposed to be out around March of 2021, but the game was such a dumpster fire he’s been pushed back so far they don’t have an idea of when he’ll come out.

We have seen literally nothing on him. He probably is barely even in the development stages.

They got all the PR flack, none of the financial reward. It’s amazing.

I bought it on ps purely to play as spider-man after my friend convinced me it was an amazing game (since learnt not to trust his judgement on games as this wasnt rhe last game he recommended) and spidey is still nowhere to be seen and i stipped playing at about 3 weeks after launch.

Now I’m curious what else he made you buy

This was always going to be a worse spiderman experience that Insomniacs Spiderman anyway.

When they announced PS exclusive AND it’s not even the same Spider-Man from the PS Spidey game, I thought it was kind of odd. Sony must really love Spider-Man to get that exclusivity, they don’t own him for games afaik and Insomniac chose Spider-Man for the game when they could have chose anyone.

Based on when I played when it came out, I don’t know how Spider-Man would even work since characters like ironman and Thor has a ceiling and can’t fly very high. It just seems like the swinging wouldn’t work well in that game.

It’s situations like this which always baffle me that people will point to roadmaps as justification for games lacking content. Roadmaps can be changed, or outright removed. They’re nothing more than a list from developers saying “well we’d like to do this, but no promises”

That roadmap was flushed down the crapper so fast.

Ans now it's sold at 3 bucks with a 96% discount on the store. That's gotta hurt

My favorite part of Anthem was where Bioware devs sat on ass for 2 fucking years playing paddycake trying to solve problems that have already been solved in other games. Absolutely pathetic tbh.

Developers aren’t even delivering advertised features. Putting faith in road maps is even worse. (Where is watch dogs new game plus Ubisoft?).

And yet those fucking whales and dumbasses, like one of my friends, dump hundreds and thousands of dollars on a line of code that gives them a pretty spaceship in an alpha version of a game that is over 6 years in some kind of piecemealed aloha state. JFC, I cannot cannot cannot comprehend why anyone is STILL giving them money for this shit on empty promises that so far have had maybe about 5% delivered.

Roadmap to an announcement of a possible roadmap to a major update... coming summer 2025.

I still can't get over how few villains there are. Who creates a Marvel game and only includes 3 major villains in the game?

How do you fuck up an avengers game …

I can't believe this thing has been out nearly a year and we STILL DON'T HAVE SPIDERMAN!

They made such a big deal about having the character exclusively on Playstation and by the time this character actually launches in the game, it will be dead.

While this is obviously true, the thought of being able to play Spider-Man with other Avengers has the potential to be fun (so long as the story is decent).

But having worked through about 35% of the main story, the set pieces just haven't been there for the most part. I don't have much faith they'll be able to pull this off. I would suspect that the morale in that company is rock bottom at this point.

Spiderman was dated as "early 2021" originally. Was never going to be more than a few months earlier, but I agree this game is a dumpster fire.

The game is already dead lol

Bought this to play the SP campaign and played for a few hours and enjoyed it. Wanted to play some new stuff and deleted it because the file is up to 88gb. May redownload again later.

I’ve just gone ahead & erased this game from memory. I don’t think any amount of post-game content or roadmaps can salvage a game that so fundamentally missed the mark. It had a decent, albeit short campaign but that’s about it.

Yeah, I can be pretty lenient on franchises I really like but this game is dead to me. I'm over here emulating X-Men Legends just for something Marvel to play and that's way better than any time I spent with Avengers. Fucking game has THREE villains. How does that happen?

Part of me feels like Sony made them delay it to try and advertise and build up sales with when they release the next Spiderman movie. Could be wrong, but it still boggles me to this day that they've stayed so quiet on the issue when vehemently advertising it before release. Only reason I'd think SE would do this is if it was out of their hands and more in Sonys ballpit.

Then again, I'm probably being optimistic which is probably more than what they deserve with how this game turned out.

Nah, I think the game did terrible in sales, and I bet that they have certain financial considerations the two companies are working through.

Will we get a sequel for the SP campaign?

Also, Guardians seems to be SP only

part of me gravitates to saying “how is this game not dead yet,” but i stuck with star wars battlefront ii for all two and a half years so do i really have room to talk