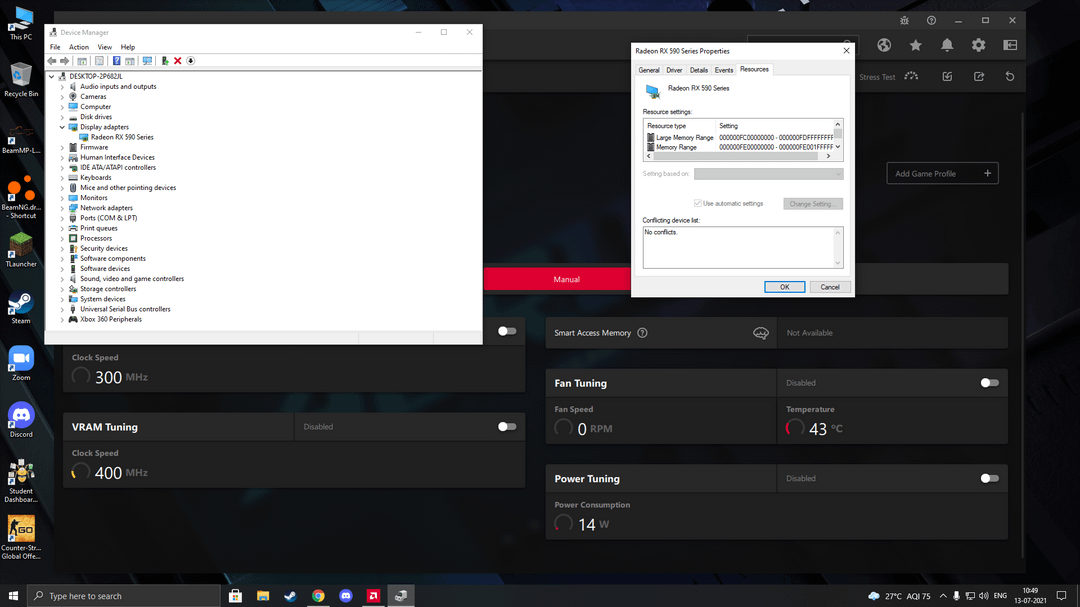 AFAIK, the RX 590 does not officially support SAM functionality, hence why the Radeon driver says unavailable.

large bar support has been a thing advertised for older GPUs, just like how large bar is physically documented on the pro cards preceding the consumer 400 series. AMD just keeps it disabled to segment the community and push them towards newer cards. Always under the guise of "we can't keep supporting legacy" even though it's hit or miss regardless of what's supported, and the fact most of the supporting code for legacy stuff is frozen anyways, but we still need shader compiler fixes (which is why we need updates, not EOL'ing). If they were serious about EOL'ing they would have split GCN 1-4 onto their own driver (bug fixes only), then Vega on another (bug fixes + some minor updates), and Navi on a third (fixes and new features). Polaris uses the GCN3 compiler so this EOL is hot gas except outside of management handwaving.

SAM support on older cards would require a BIOS update, so it's not as simple as just ticking a box in the driver.

SAM is mostly beneficial for higher VRAM cards with lots of bandwidth. 6+ year old cards are not one of them. AMD Is a for profit company, we can voice our opposition to their decisions, but they are solely concerned with money, and 6+ year old hardware isn't netting them any. Dropping support for old hardware/software is nothing new and is't going away any time soon.

Basically every GPU since Polaris supports Resizable Bar. Including the 590. In fact resizable bar has been functional for years on linux with AMDGPU.

So windows device manager is correct.

Unfortunately, AMD has yet to enable SAM in the driver for older cards.

fiji supports it too, large bar is quoted in some older advertising reference PDFs from AMD itself circa 2015/2016, as a "pro" only feature.

Notice how half the games tested on nv 3000 series lost performance with it enabled? It's not always a benefit to use it.

RBAR has been around since PCIe 2.0 was introduced IIRC. All it does is remove the 256MB limit. Hardly any benefit would be seen from a low VRAM card.

My 5700 XT shows in GPU-z as not having GPU BIOS support for it. Everything else is showing it as enabled but the Radeon Software like you. I don't know how to enable it. I did reinstall drivers with DDU. I think we need a BIOS update from the GPU manufacturer.

The trick is to set the corresponding settings in UEFI and THEN re-/install the drivers.

Just install your GPU driver by DDU and install it again, should work then just fine.

EDIT: Which CPU are you using?

Ryzen 5 3500.Do you have a Gigabyte motherboard if so what did you change I have Gigabyte B450-M Aorus Elite with latest BIOS.

I had the same issue with my card. When I checked the UEFI/Boot settings, they were set to legacy, and once I changed them to non-legacy (forget what it actually was), it began to show up in the Radeon software.

Someone should hack the Windows drivers and enable it by force. Wish we knew where to start looking though.

BIOS has nothing to do with this, it's purely driver limitation. You can get SAM working in Linux for basically any GCN GPU (provided that UEFI boot is enabled in the bios and CSM is disabled)

Only supported on 6000 series cards.

Let me get this straight, in context to much of the comments already landed here because i was going to comment when i first saw the post but then i figured i'd see what loony claims would be made.

Anything prior to RX 6000 series doesn't officially support SAM... AMD's driver doesn't have it enabled to support it, nor do they wish to. In order to get sam fully functional, EVERY video card also requires a vbios update, something no manufacturer is likely to do (aside from asrock since they often are willing to do stuff like that considering what they did for ryzen 5000 and 300 series mainboards).

SAM has been tested in numerous circumstances in which previously unsupported cards have had it enabled and it's shown to overall had no effect or in plenty of cases, negative impacts. Hell even RX 6000 has a number of situations where it's had a negative impact.

And yet people think AMD's screwing them around for not enabling a feature that isn't officially support let alone dishing out "updated" vbioses for cards that have been out for over 5 years now. Man so many here have quite the screwed up mentality. It's as bad as the individuals still gritting their teeth that they don't have HAGS yet, another yet unreliable function still at the moment.

It's incredible to me that so many will slam amd over the most minor of performance fluxuations or bug or whatever they perceive to be unacceptable, but at the same time demand a set of features that are barely tested, known to have as bad if not worse impacts, is completely unreliable and has been disabled by numerous people to "resolve" some of the known issues. Like watching a bunch of bipolar schizophrenics.

People keep saying they have it enabled for their 5000 series because they updated their BIOS, drivers, GPU-Z, etc. and they say it's enabled.

SAM is not supported on older AMD cards like the RX 500 series, that's why it's not working. Resizeable Ba

Learn to do GPU BIOS programming?

IDK just be happy to know when you next buy a GPU it will have the bar thing & by then maybe more games will support it.

Nvidia is also not supporting old cards and has lower support so AMD has no motivation to support old cards, if Nvidia did start drooping BIOS for it's old cards maybe AMD may but there is a risk with every BIOS flash and I suspect no one wants to deal with people bricking there GPU's with no warranty.

You do get support for the new AMD Fidelity FX thing that will give a much bigger boost so it's not all bad.

Check GPU-Z. It's newest version has added BAR support check that shows what you are missing. Just click the "Resizable BAR" on the main window.

Although in your case it might be that older GPU's don't have official BAR SAM support.

I believe you need a pcie4 card.

I would download HWINFO and see if it says it's enabled/available.

On my MB (Gigabyte Z370) I had to both enable resizeable bar and make sure UEFI booting was enabled for it to actually work.