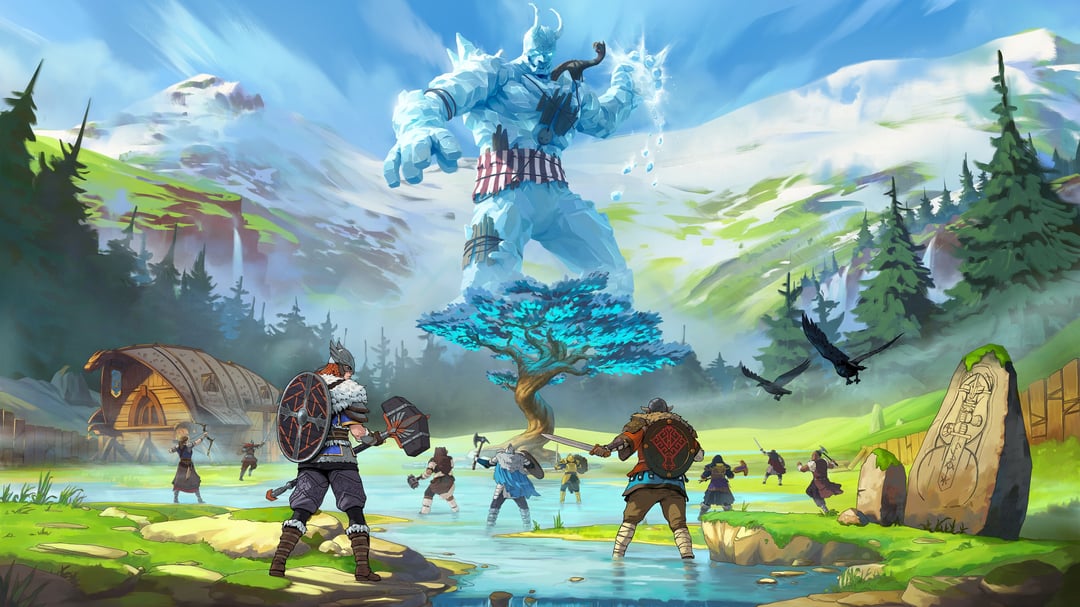 Heads up, the Giants are coming!

Midgard is under siege from unwelcome visitors.Mythical creatures, deadly spirits, and gigantic brutes threaten to bring on Ragnarök—the end of the world! It’s up to you, a mighty Einherjar, to cut short your glorious feast in Valhalla and return to Midgard.There, you’ll need to become the ultimate Viking and survive—even thrive—to save your village, and the world, from total destruction.Luckily, you don’t have to brave it alone: your (mostly) fearless tribe of co-op companions will help you build up village defenses and find treasures through a vast, beautiful realm—all while doomsday ticks closer and closer.But don’t let that stop your tribe from having the best apocalypse of your lives.“Surthrive” the Viking way in Tribes of Midgard, a multiplayer, action-survival RPG of gigantic proportions. 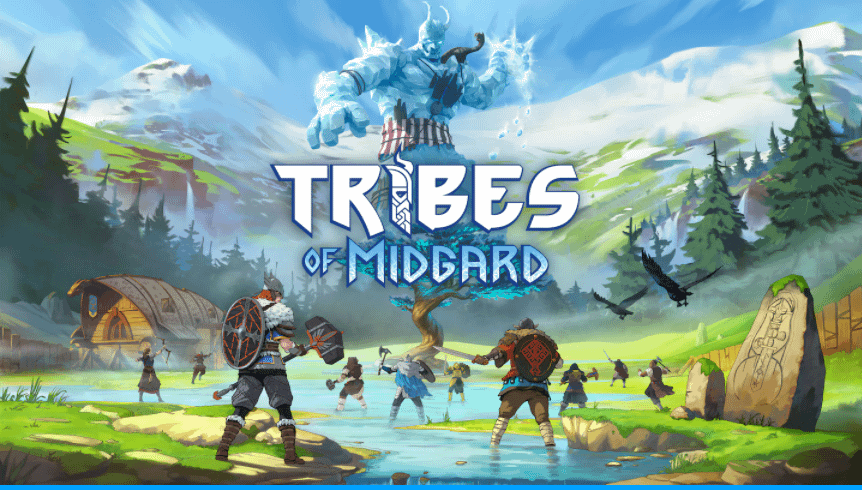 Initial impressions — for a $20 game, I’ve had a good time so far. Something I would have liked that I wasn’t able to figure out how to do, is just create a session with a limited number of friends without putting us into a public lobby. It seemed to be either the solo queue or invite friends and get dumped into a public lobby. And this is the kind of game where you’re gonna want to strategize and communicate as far as what you upgrade, where you farm, when you need to move together, etc.

It reminds me quite a lot of the game Kingdom: Two Crowns in that you’re protecting a home base and each night, monsters will come to fuck it up. And every so often, a blood moon occurs and they’re stronger, I think? You can invest in building gates to close off the areas, and give arrows to archers. Nearly everything you do creates souls (even harvesting wood, stone, metal, etc.) and the higher quality tools you use, the better the yield. And then you have to decide where to invest those souls — keep the Tree in the center alive because that’s the game over state if monsters overrun it. But also, do you use souls to repair your heavily upgraded axe, or to bolster the gate, etc.

You can pick personal quests with a predefined goal (so like one reward is a starter kit that will give you a full suit of villager armor, a sword+club+shield when starting a new game, which will definitely help you survive early encounters with enemies better). I’m not sure what the “win” state is yet, if it’s x amount of nights survived or other goals. I’ve only played as the warrior so far (who has magic somehow, but I mostly was just button mashing as it was hard to tell what my skill was meant to do at least on the initial impressions — you build up mana by hitting enemies, but it gets busy and is hard to tell what all is done by who with 10 people).

Ultimately, it has rogue lite elements in that your goal is to push further and last longer and fight harder, as it gets increasingly harder for you. I’m not sure if the world is procedurally generated or not. You can use resources to build bridges and paths towards other areas (and I think you need cold/heat potions to survive the harsher elements — not sure if you can make clothing/armor that will help you out). I think you also take damage at night and as time goes on, winter has you freezing too (maybe). I think it’s an easy sell for $20 (I haven’t looked too deeply into the cosmetics or microtransactions or any of that yet). At any rate, I think it’s a fun distraction to play with friends while we wait for stuff like Back4Blood, Aliens: Fireteam Elite, etc. to come later this year to scratch that multiplayer itch.

Make sure you invite your friends first, then create new game in matchmaking. Brings up a menu with options for 10-man or Only My Party.

My only gripe is the lack of 60fps. Not that big of a deal, but I can see why this would deter a lot of people.

if you do the short saga is this also matchmaking?

My only gripe is the lack of 60fps.

Wait - this game is seriously only 30 FPS?

Would you recommend it for someone that enjoys diablo and mainly looking for a solo experience?

As long as you realise it’s not a story game or a persistent world game, it a rogue-like. Play, tree gets destroyed, start all over again.

Looks like the difficulty gets pretty high after a while if you're solo. Seems like it would get boring also. Not sure I'm sold on this game.

Same question. I looked at it and thought, Diablo?

This game is like an overhead Two Crowns or Terraria (right down the "defend at night, and get ready for the Blood Moon") mixed with live/die/repeat mechanics. You keep your same character, but runs are really a futile attempt to stave off utter destruction. I'm imagining with everyone working together (some for offense/defense, some for building/gathering, some for a mix of play styles) the game might be more workable - but solo, it's just a countdown to death. It's not an RPG in any real sense. It's more about defense mechanics.

how long does a run last?

I did a solo run and I was killed after 40 min. There was out of nowhere a powerful enemy which was just too strong for me. But it was my first run so when you learn more you will get better.

I've made it sevral times to Day 4 when the first Giant spawns. He absolutely ruins everything, but in taking it on a few times I've had more defences, better weapons and do more damage to him each time.

A successful run on Saga could take around 3h,

Man i hate this shit, there's so many cool looking games on the horizon and I have no clue where I'l find the time -.-

ID: h6p3tuh
r/patientgamers
Go through your back log if you got one. If there are too many games for you to play make a decision on what games are immediate buys and what games you can wait for until they go on sale. It’s helped me out a lot
ID: h6pw6qy

Well the guy seems more worried with time than money from his reply.

There is the literally nobody asked /

Can you customize whether your character has a beard?

And can you have multiple characters? For example if I wanted to progress both with a friend and solo separately.

Anyone know if there's a split screen local coop option at all?

There is not split screen local co-op.

Too bad, thanks for the info.

Is this crossplay with PC?

Nope. PS4/PS5 can play together.

This game looks so damn good can't wait to play it with the wifey tonight!