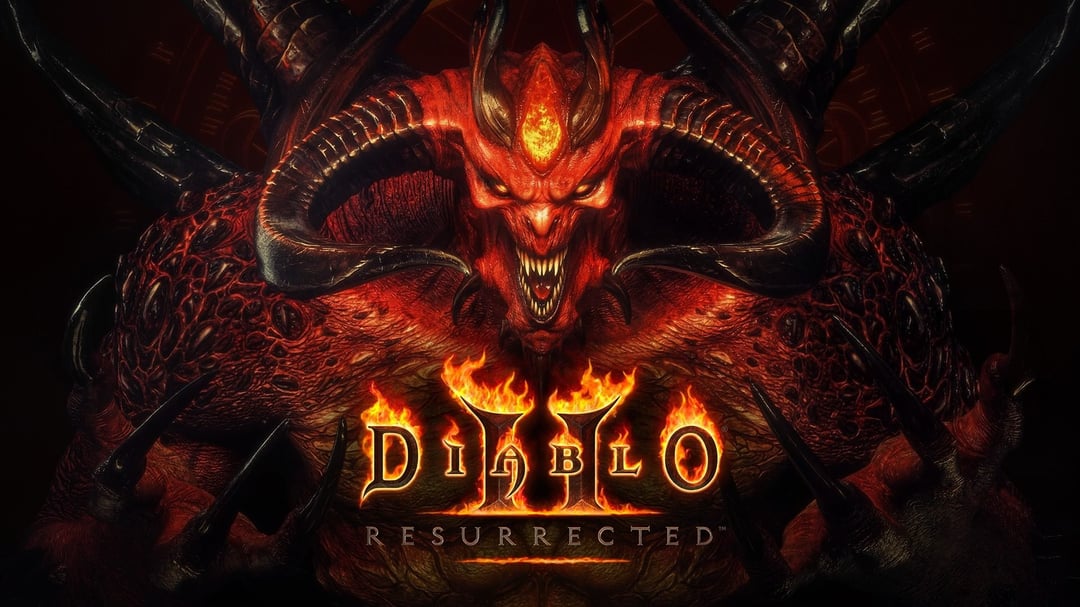 It’s terrible. The console experience is just straight up bad.

Gameplay feels….delayed? I’m not sure how to explain it but the controls feel mushy, almost like I have constant input lag.

A handful of disconnects here and there, but that’s the least of my worries during a beta.

This just ain’t it, Blizzard.

So much correct in this. I only got about 10 minutes in before I couldn't handle it anymore.

The input lag comment is legit. I was even playing "solo" so I thought it'd be a local instance but it seems not. That alone makes this very disappointing. Guess I'll try it again during open beta and see if there are any improvements.

You cannot be serious that this isn't a 60 FPS/4K experience...

I believe you but I'm stunned.

Unless both modes are 4K, there is no 4K/60 mode. I can’t imagine that they’d have two different presets, at the same resolution, with different frame rates.

Here’s a shot of the in-game graphic options: 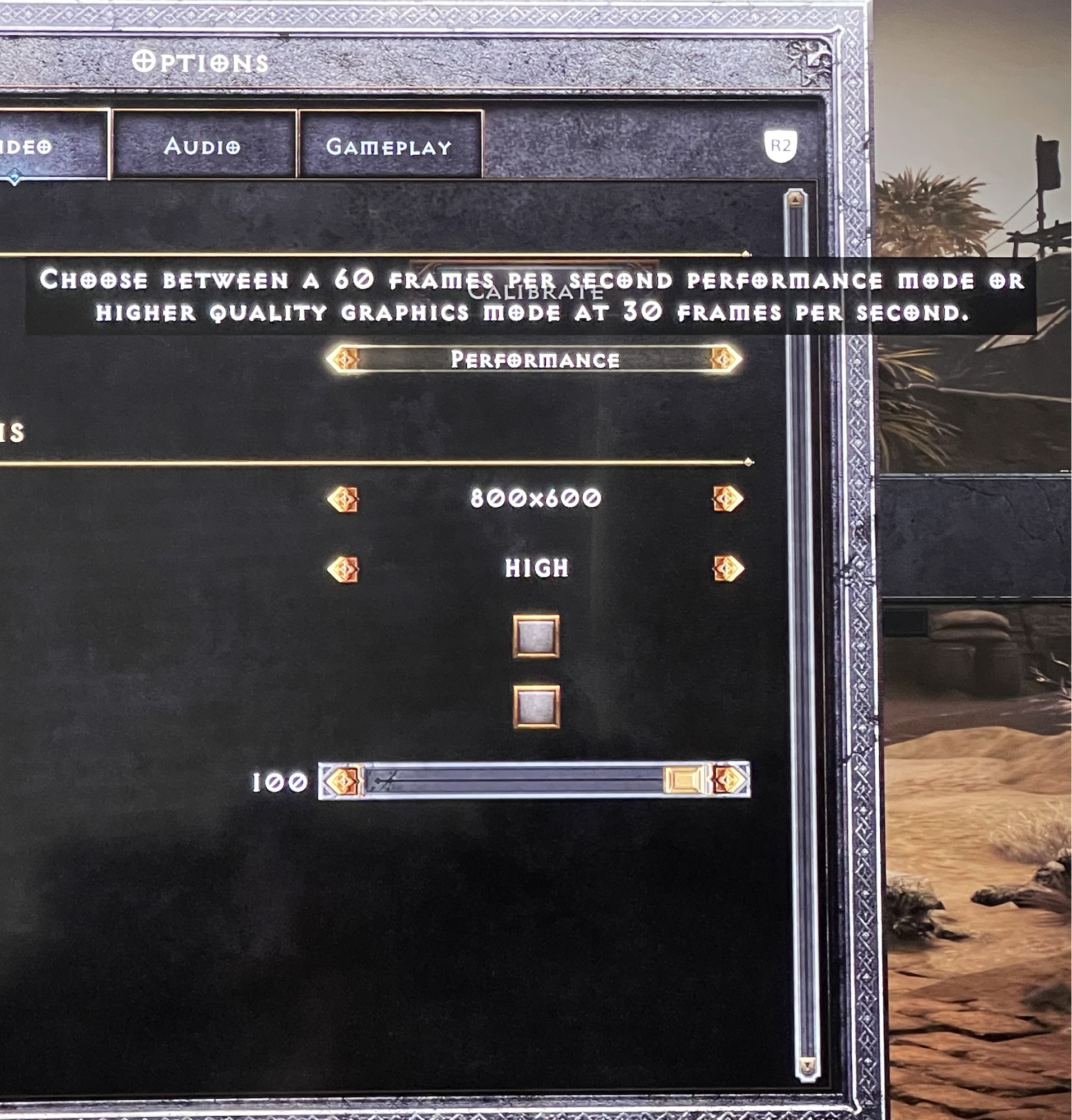 Damn it’s not even 60 fps? Was about to preorder but nevermind.

I knew. I just knew they would botch another classic yet again. The price tag on this thing is a joke too.

Will the classic version on pc still function normally?

Most of this just sounds like the original lol

It's Vicarious Visions, which is now part of Blizzard.

This is a game built for pc, literally. It doesn’t have the movement of d3 that converts perfectly to a controller. Day 1 pc purchase for me but console I dunno

Its Blizzard... Did anyone actually expect greatness? Those days are long gone.

Eh the D3 port on the Switch was nearly perfect in my eyes. I had high hopes for the console D2s.

No 4k/60 and no lobbies and no way to chat? Holy shit this can’t be real. People need to hammer these points considering it’s a beta

The game comes out in a month. There is no way they are adding features now.

Today if you pre-ordered.

What happens if you buy it rn, do you get access?

What's in the betA?

Wait is this real? There are no lobbies on the console? Lmfao unbelievable

Wtf no lobbies?? That's an immidate refund for me if true and I'll just buy on pc. That's the entire point of d2. Find a lobby that suits you... trades/pvp/farming and ect. That's a literal core component of the experience

So it’s impossible to play the game properly on console? Totally bizarre. How do you trade or set up Baal runs?

You can't... It's really Really disappointing. So mad I pre ordered on ps5. No where near pc experience without game browser and text chat.

My first hour experience: everyone is somewhere else due to no communication possibilities

I’ve never played a Diablo game. Should I play this or diablo 3? Would be on PS5

Diablo 3 is great on console imo and you can play with up to 4 ppl on the same screen.

Diablo 2 was fantastic when it came out, better than 3, but it was never a console game and it looks like they havent put much work in the console controls 🙁

If you play on console, especially with someone else, then 3 is a no brainer, 2's remaster wont even have local coop.

I suggest people start refunding their pre-orders / not buying it at all.

I am a extreme die-hard Diablo 2 fan but Blizzard has been going downhill for 10 years now.

This company only care about milking every customer for their money. I'm not talking about the Devs and the employees themselves but those who are above them in the corporate setting. Its all about shareholders now. We as consumers are a second thought to their balance sheets. Because they have learned from buying habits of loyalists, that they and other companies can get away with putting out a bad product and even cutting features last minute.

Launches are progressively getting worse and worse because we as consumers don't hold these companies accountable for polished products at launch anymore. This has a large part to do with the digital trend and being able to patch after the fact. So deadlines are really just a moving target, and they rely on the consumer to be "understanding" of issues at launch at this point.

This is digital release only, because thats the biggest profit margin for them. They have ignored all requests for a physical product. Which has been brought up multiple times since the announce at Blizzcon Online during the pandemic.

They aren't making a ps5 version, so anyone with a ps5 will be playing the ps4 version and we will be limited to whatever the ps4 system can handle.

It was just leaked earlier this week they are removing TCP/IP completely from the PC version which they pointed to "security" reasons but that is a smoke screen, and not the real reason. Doing so hurts they thriving modding community that has helped keep the game alive the last 20 years, and helped encourage them to remaster this title... they even said so at Blizzcon, "We love the modding community, and are working closely with them on the remaster, to make sure they are supported when this launches."

What they don't tell you is they contacted the modders during pre production, and started off nicely with them. But for the modders who didn't want to be bothered helping or didnt have the time to give them feedback / all their source code for their changes. They were met with legal threats.

Just the other day they directly asked, and now are claiming Ladder seasons wont be at launch, and there is no ETA for when they will arrive.

Warcraft 3 Reforged they did the same thing, a year and half later Ladder systems are still missing from that game! There is zero motivation for them to "fix" it either. They have abandoned that title due to sales, And they destroyed the original version so players cant even go back and play the old one now in this wake.

Add the sexual harassment accusations of recent, which is very public if you google it.

Add the Blitzchung Incident, google it if you are unaware.

Add Diablo Immortal Blizzcon announcement, which their stock price nearly got cut in half within a week from.

How about the fact they started to time-gate WoW content, only so they could milk subscription time from users longer for content they had already paid a box price for, and now had to wait for a drawn out period for it to finally release?

This company is completely out of touch with the fans because they have little to no interest in putting out good products anymore. At a corporate level. They have been riding on their name for quite some time, and will continue to do so until you as a consumer start to speak up. The only way to do that is with your dollars.

They will continue to do the least amount possible for the most profit unless we as consumers draw a line.

The focus of these companies needs to start to shift back to building a great product, and customer satisfaction.

If we as gamers continue to let companies like this slide and do this, It only makes it easier for others to follow suite.

Again refund preorders and don't buy until they have a polished product they promised, and start to speak up. Make others aware. Make companies like Activison-Blizzard realize they cant get away with this treatment of their products, customers, and even employees.

Is there really not a PS5 version?

"To play this game on PS5, your system may need to be updated to the latest system software. Although this game is playable on PS5, some features available on PS4 may be absent. See PlayStation.com/bc for more details."

Its only a PS4 version. and as we know PS5's backwards compatibility isnt what Xbox has so we are locked to whatever the ps4 can handle.

Even though they put the ps5 tag on there... again this is a huge company playing smoke and mirrors just to get access to your wallet. its fucked up!

This is so disappointing, I've been wanting a remaste

r/remake
forever and have been ultra hyped since it was officially announced.

I was honestly leaning towards PC for this anyway, but some of the comments and issues I'm reading about are going to be universal almost certainly.

Man, are they going to butcher my boy?!

You only get a PC key for watching a Twitch stream

Anyone know of a good PS5 stream for this.

Curious how it looks with the controller interface/controls

I’m playing it now and it’s actually surprisingly good for a remaster of 20 year old pc game. One thing I’m missing is lock on but I might just be dumb and over looked it.

The times I played D2 on pc I never got very far because I could never figure out how to use multiple skills at a time and now it’s super easy with just matching them to the face buttons and bumpers/trigger.

Dont play it. Dont show blizzard ANY good will.

Here's the thing - the whole debacle is a few shits at Blizzard. The majority of staff across the company are regular, decent people just trying to pay their bills.

Boycotting their products won't do shit to the higher-ups that allowed the shitshow.

Blizzard doesn’t deserve any money after these past actions

This is still just a closed beta yet right? So no access?

Watch a twitch stream for 2.5 hours and you will receive an early access code.

Can I still refund game if I preordered and played Beta from Sony Store?

Game definitely picks up even slight stick drift in your controller. Character stops attacking all the time because it thinks I'm moving.