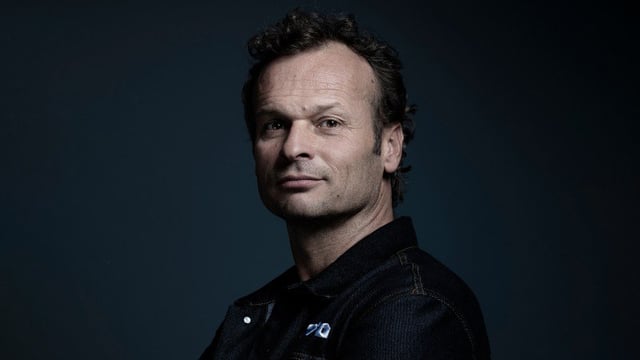 In Hulst's eyes, what makes a good, interesting game is in line with what PlayStation excels at. "I say this as the head of PlayStation Studios, and that's kind of the games we're known for – a very meticulously crafted, beautifully directed story that takes place in a world that is really inviting to spend time in," he says. "That's some of the most joy I've had in games. That definitely speaks to that single-player, narrative-driven, character-based experience that I've worked on a lot myself, that I now work on with a lot of the great studios at PlayStation Studios."

"I encourage our teams to be fiercely daring in their choices, and they are, but it also means that I have to back them," he says. "I think that our teams have been really brave, and that that's not just with entire franchise pivots, but it's also going into Norse mythology on God of War, it's The Last of Us Part II's narrative structure and creating an experience that is incredibly compelling but not necessarily comfortable for the player at all times. I back that; I want us to push the envelope and seek the boundaries of our medium and the state of the art of storytelling. I think that is why we do what we do with PlayStation."

PlayStation Studios houses a global network of developers, and there is a wide variety of staff in each studio and how they approach things is unique from place to place. “We’re a bunch of uniquely different creators,” Hulst says. “All studios have their own name; they all often have their own technology. They have their own style, which I nurture. I like that diversity. And at the same time, I do think that our studios are better together. We share a lot of ideas, sometimes we share technology with each other. We try to make each other better and strive for making the best possible games and upping the quality at all times.”

"We are investing in our external development group out of Tokyo as well, and that's a team that has obviously worked with the likes of From Software and Kojima Productions. So we are very invested in Japanese development and Japanese development is something that we love ... I think it's such a core part of the PlayStation identity that I can't ever see us shy away from Japanese or even Asian development."

Hulst says that while PlayStation games have had great success on PC, the console versions still are the priority and games will hit there first. "Typically, there have been about two years between the release on our platform and the PC platform," he says. "But you can rely on us to continue to create platform-defining exclusive content for PlayStation – that's part of the reason why we exist. It's really important for us to squeeze the maximum out of the platform, to build showcases for the platform, and really let the audience see what these great features are contributing to the overall experience."

I love that he backs risky decisions made by several PlayStation studios. With a lot of mainstream cinema playing it safe with their storytelling nowadays, I'm hoping to see some of these games take bold decisions with respect to storytelling or change their overall direction like Last of us part 2 and God of War did.

This. I was so apprehensive about how Sony would take risks after Last of us 2 got mixed reception from people. It was one of my most favorite games ever. Love to hear Hermen saying he will back those teams that take risks. New IPs from first party studios like Bend studio new IP, Multiplayer projects from partner studios like Haven, Firewalk, Deviant games in a large saturated MP market requires this risk taking and I hope we get some ground breaking games this gen.

So, a new Legend of Dragoon perhaps? Heck, there's lots of franchises from PS1 and PS2 days that absolutely DESERVES to be brought back.

Can't wait to see what the teams have been working. Hopefully we will get a PlayStation Experience or Game conference soon. I really like Herman and how much passion he has for gaming, he loves games and he wants creators to be brave and push their limits. I would love to work for a guy like him. It makes perfect sense to have a person who started with a studio like guerilla at the start and moving them up to a top tier studio and Now at the helm of Playstation Studios

Hulst must have a reason why he keeps specifically mentioning how their external development group in Japan has worked with Kojima and FromSoft before, just saying...

They are most likely already making another exclusive for Playstation....he almost always mentions those two when he talks about external partnerships

Or maybe it’s because they made their most well known exclusives? Just sayin

I love Bloodborne and Death Stranding but they aren't the most well known PS exclusives.

Can we have a Killzone reboot made exclusively for PS5 pwweeeaasseeee?!?!

Too much sizzle not enough steak!

Stop talking about what Sony is doing and SHOW US!

It has been FAR too long since Sony has done a real event.

I feel like Hulst has given 5 interviews this summer and they have all been exactly the same.

Hope PlayStation has some big reveals soon to give him something new to talk about. 🙂

It’s just PR. I wouldn’t even be certain he said all of this himself.

Why wouldn't you be certain?

How's about you throw Wipeout fans a bone, eh?

They tried with the collection hd on ps4. Didn't sell well. It's dead unfortunately

And with that AWESOME VR patch, it's one of the very best games on PSVR, right up there with Astro and RE7.

It would be amazing to see it rebooted for PS5 and the next-gen headset.

It sold well at launch. At the same time, the only fans you're attracting to a Wipeout game are Wipeout fans - that was the second release for the 2048 content and the third time the HD/Fury stuff has been released.

Because of recent Wipeout rumours, and the lack of a game like Forza Horizon on PS - how cool would it be to have an open world Wipeout? Taking place in a huge sci-fi mega city? I’m drooling over this thought… 🙂

That sounds awful to be honest, the appeal of Wipeout is the tight tracks and handling!

The western catalogue is great, it's perfect, but more investment and studios in japan need to open.

Playstation is amazing because it combines both worlds of video games...for every bloodborne there's a god of war...please hermen, keep working with japanese companies/studios.

I always get this dude confused with that Harold Halibut game.

Hulst was enthusiastic about continuing to move forward in the Japanese development scene. “We’re building out Team Asobi under Nicolas Doucet, so we’re actually investing in that team.

So they weren’t invested in JapanStudio before that? lol no wonder a bunch of the creatives left

That’s not a fair representation of what he said. Of course they invested in JapanStudio - it was their studio! But while they’ve cut some areas they’re also growing others. It’s not just cuts everywhere or some kind of withdrawal from Japan; they’re just changing things up. That’s the point he was making.

Well to be fair it seemed Studio Japan had a lot of carté blanché for a studio that was struggling to make its own games (see last guardian), and probably could of used a change of leadership. Imagine if Square Enix was unable to salvage the FF projects it had been working on, or if FF7R had failed, or if KH3 was still stuck in development hell. There was a decent amount of cash being put into the studios that they were getting nothing (or not that much) out of.

I was still shocked to see they shut down everything but Asobi but I don’t think it was completely unwarranted.

Seeing someone who left JapanStudio like Keichiiro Toyama immediate start work on a new game after his departure makes me think it was more the devs were at odds with Sony on what they wanted to develop so it created a stalemate.

And I don’t know if I’d compare JapanStudio to Square Enix just because they both happen to be Japanese studios, Square’s an entirely different beast in comparison. JapanStudio has always kinda been a AA studio at most and I think Sony trying to make them produce more mass market appeal type games is what lead to the restructuring.

JapanStudio made flop after flop that performed poorly financially. Why would a company keep investing in that? They reformed the team for reinvestment. That's the sensible thing to do.

They were invested, the teams simply couldn't make a major game. Sony sent the former head of Santa Monica to help the studio (when he went JP internally were trying to make around 40 titles pushing against each other), they then send Nicholas. None of them could save the studio.

There's a point where you have to cut the studio loose if they simply fail time after time. Sony doesn't need a big team in one of the most expensive locations in the world if all they can make is a 300k seller with a low score that pretty much none of Sony's consumers care about.

Dude. Move on with your life. Complaining over JapanStudio at this point is meaningless.

How about Blue Box, Hermen?

No thanks. Most Japanese games are generic anime garbage only losers cares about or gacha games. Just focus on the west thanks.

It's quite ironic you say that when your username and profile pic are literally of a well-known Japanese IP.

PlayStation has no RPGs? Maybe not first party but there are plenty to choose from. Like wtf

Saying PlayStation makes movie games and mentioning them as third person action/adventure games is such a weird take - that's literally a broad and vague category of games; Grand Theft Auto, RDR, Souls-Borne, Final Fantasy all fit into it. Are all of these movie games? Is Returnal a movie game? Demon's Souls? Astrobot?

How is Gran Turismo Sport even bad? Sure it had an anaemic start as the team essentially wanted to create a next-gen online- centred racing experience from scratch, but it's a pretty good experience now. GT4 and GT6 were also legendary. Killzone 1 and 2 were amazing during its time. And Destruction AllStars granted was not a hit, but it was made by Lucid Games. Like all game companies, you cannot expect Sony to keep releasing bangers all the time.

This generation is still too young to say what Sony has in their 25+ games roadmap. I think they will definitely try and diversify their lineup and hopefully cover more RPG genres as you said. In the meantime, no one is stopping you from also trying out other games from Nintendo or Xbox. The gaming landscape is not exclusively Playstation.

This same criticism applied to Microsoft though. They both have their niches and have only recently really started expanding with their first parties. I disagree they can't make a good multiplayer or racer however. Strategy games aren't super common nor do they perform very well financially usually on console. All the big RPGs have largely been third party for years until Microsoft just threw money at one of the larger studios for such.

Returnal is the first AAA rogue like and Ratchet & Clank is the best non-Nintendo 3rd person platformer but yeah it's not like the PS3 days where the console was an absolute must-buy whatever genre you're into, Resistance, Killzone, Motorstorm, Gran Turismo etc.

I loved rift apart, but it had hardly any platforming compared to previous iterations, and other platformers.