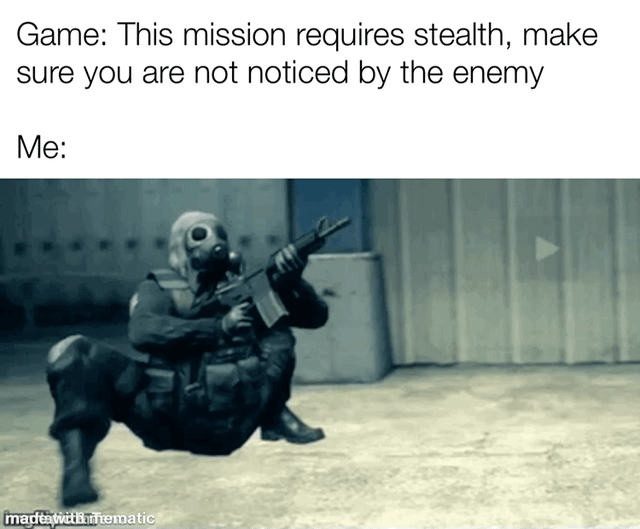 There's a couple stealth missions in Kingdom come: Deliverance that took me actual weeks irl to complete. You had to like sneak into a camp, get info, break their arrows, poison their food, all that good stuff. Couldn't do it with a shitty stealth skill so I left, leveled stealth came back and it was still a huge struggle. So I said fuck it and ran through the camp like a maniac, doing everything I need to do while being chased by EVERYONE. I didnt exactly feel accomplished but at least it was over with lol

Oh god.. the mission in the monastery almost made me quit

The monastery is especially difficult if you don't listen to the instructions and remember where the rooms are...

Mine is gonna be Hitman: Blood Money Curtains Down Mission

I only remember one mission from hitman bloodmoney, and it was the one where you had to kill an actor and the guy spectating.

I don't remember any other specific details, other than being able to replace a fake gun with a real one, but that's probably bcoz the game is older than I am

that's probably bcoz the game is older than I am

Damn and here I was still thinking of Blood Money as being a "relatively recent" entry. Making me feel very old

I just remember that one mission...I think in the laboratory of the first game by the bridge and it took me a few tries to figure out how to get through that without alerting the guards. There's also that clockwork mansion from the 2nd game but that was more just figuring out the maze than anything difficult. I remember even looking up the strat for how to get the achievement in that house and still messing it up.

The cool thing about the clockwork house is that if you know the layout of it you can kill your target within like 10 seconds of starting the mission, you just need to use slow time and shift a few rooms around and you'll catch him before he can leave the hallway he starts in.

I replayed Dishonored last month to get the Ghost and Clean Hands achievements.

Hours of teleporting around while I stared through that piss filter. It was worth it.

I try to get all the achievements I can, so when I saw that the first game had Ghost (never seen except by targets), Shadow (never seen at all), Clean Hands (no killing at all), and Mostly Flesh and Steel (no magic except the basic teleport), I felt like the most economical thing to do was all of them at once. To put it lightly, it was very difficult. Everything had to be planned in advance, every route analyzed, every quirk of the AI learned. But seeing all those achievements with the same timestamp never fails to make me a little proud.

Big Bank took me waaaay too long to learn (PAYDAY 2)

Solo stealthing big bank without killing any civs and getting all loot possible is probably one of my favorite achievements.

I almost pulled off the same thing with go bank which despite it being a much smaller map with much less loot was significantly harder due to the micro managing of the phone, endlessly spawning civs, and cop arrivals while trying to empty the vault. I did get all loot but had an unfortunate civ casualty when I was forced to grenade 3 out of bounds guards that immediately saw a fellow out of bounds civ panicking. Not nearly as proud of that one cause it didn't feel "flawless".

Day 3 of Framing Frame was also fairly difficult but after big bank it was almost Childs play in comparison.

My next goal was Shadow raid but I only got about halfway through completing it when I got bored of PD2 and haven't been back since.

Splinter cell chaos theory the bank mission. I don’t know why but I was so happy to finish that one completely undetected. I replayed it about 100 times because I kept screwing up and I wasn’t about to save spam the level.

Also on that gif. If I was on guard duty and that creeped by: “I’m just going to pretend I didn’t see that. It’s fine, no it’s not…”

The worst mission for stealth in that game is the bathhouse level imo, especially if you're trying to get through it without knocking anyone out.

The bank mission is probably one of my favorites because it makes me feel like I'm in some 80s or 90s bank heist movie lol.

Escaping the hospital in Syphon Filter as a Kid gave me great accomplishment and an addiction.

This is what I came for

The OG Splinter Cell had a mission where you infiltrate the CIA so you can't kill anyone or be detected & it was tedious & frustrating as fuck. There was even a moment where you need to follow a guy through a door with a keypad & you're supposed to use the thermal goggles to look at his fingerprints to figure out what the code is but nowhere in the game does it tell you that's a thing so I spent hours running around looking for a code I missed. It was the single most frustrating mission in the game but God damn did I feel like a badass when I finished it.

Metal gear solid 5 when you rescue that scientist from a heavily guarded Russian base in Afghanistan and have to escort him out.

For some ungodly reason I did it during day time, and as the completionist I was at the time, it was perfect stealth no kills or nothing.

By the end of it I had an optimal route, developed enemy patrol pre-cognition and mastered the mag toss.

same here, and then I watched this guy and realized I didn't know how to play the game at all

I did Dishonored 1, but I also went non-lethal and no power upgrades...while doing no detections. I hated myself apparently.

When your ass is itching, while you're at work.

The whole metro series. I would try to kill all enemies while still being unoticed. Sometimes it's hard af and takes long time. I screw up a lot but there's no frustration at all

The damn gerudo fortress in Ocarina of Time. drove me nuts.

Yall can laugh at me but... there was an Emperor's New Grove video game that came out for the PS. In several parts, you have to sneak past guards.

Those were the most attentive guards I ever saw in my LIFE. I was a little kid and I don't remember a whole lot about that game, but I remember those guards.

And the incredibly long maze ride with Yzma's.... Rollercoaster thing?? Sometimes you would hit tiles that reversed the car and the only way I could beat it was by holding the controller upside down

Not so much because it was difficult but because it was the first game I played a true stealth mission in, I'll say Assassins Creed 2. Mostly some of the later missions that actually require you to use stealth vs. The earlier ones that are mostly still just tutorial level.

Ac 2 has pretty bad stealth mechanics imo, especially when you are at venice and you have to get into a palace or something through the rooftop, and you have to do it unnoticed but there's absolutely no way of hiding in the rooftop besides awkwardly getting behind some pillars

Don’t laugh, but the Yiga outpost. Simply because I never usually cared about stealth in that game.

It's honestly the only part of that game I really didn't like. Every other stealth mission was more of a suggestion, but the Yiga outpost is basically impossible without being sneaky. I don't like being forced into stealth in non-stealth games.

I was stubborn and ended up killing all of them rather than getting the sneaking down. It took forever lol.

I wouldnt say it drove me insane, but the one mission in STALKER Call of Pripyat where you have to sneak through a basement of sleeping Bloodsuckers is very high up my "Oh god oh god oh god" list.

guilied up in cod4 introduced me to the concept

Now it's a ghost town

I can here to say this. Once you can do it on Deathwish though it’s easy money constantly.

The forest level in metro exodus. Last time i played through that level i literally did not kill anyone. And it sucked.

The stealth mission from AC Black Flag where you're manouvering your ship through a swamp (?) to follow a different ship.

God how I hated it.

Car shop, payday 2, max difficulty with a full group of my idiot friends. It was funny and frustrating all at the same time.

My first play through of Zelda: Breath of the wild. Doing that damned Yiga clan stealth mission for the Vah Naboris quest line was so difficult for me

That one Hospital escape in Hotline Miami. It was so damn frustrating.

In shadow tactics blade of the shogun you have to kill this wanker called lord yoghurt or whatever the fuck his name is and i love this game but bruh I had to bullshit my way through and it was the final mission I finally did it by throwing some tear gas at a soldier that accidentally shoots him and I had finally beaten the game!!!