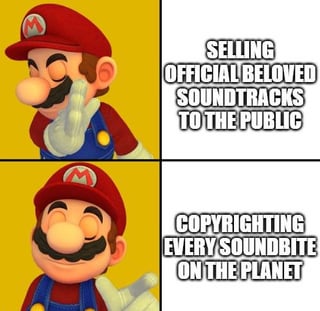 I will never understand why Nintendo is so goddamn stupid about this, as with their other shitty anti-consumer practices. Capcom, Sega, SNK, Namco, Square Enix (for some games) have all done a great job by releasing soundtracks for purchase of their games. Chrono Trigger got a frigging soundtrack release way back in 1996 with a remix album a year later. Nintendo almost never does this.

Nintendo operates like a regular japanese company, old geezers have the final word, fresh ideas are quickly shut down because they are considered disrespectful to the established system... Now you know why working in Japan completely sucks.

Even Sony left Japan to work on Playstation lol

old people maintaining the status quo that solely benefits them is why the entire world completely sucks.

Japan sounds like they don’t know how to do business at all.

Also, the Japanese laws are different but Nintendo operates as if those laws applied everywhere.

Excel and fax machines. Don't forget about the glue that holds all of Japanese society together!

Toyota is the same way. Customers beg for features and changes and they never listen they do what they want.

Nintendo wholesome 100. Why do you want, that this indie studio dies and the devs are starving?

Because they are making bank with their current methods. Their shit is good enough that people want to buy it in excess, because the games are usually really good. It's probably a "don't fix what isn't broken" scenario. They're a business and businesses want to make money and they are making tons of money so they just keep doing what they're doing lol. A lot of us definitely have a love/hate relationship with Nintendo, its kind of bonkers.

Nintendo used to play in the power game but it hasn't always worked out for them, and the success of hardware like the Wii & Switch prove most of the general public don't care about graphics if the trade-off is worth it.

Disney which single handed it controls copyright law in the US. Shit should be public domain by now, but they keep tweaking the laws to let them keep it.

Yeah Japan business are a bit more strict when it comes to copyrights and trademarks from what a I’ve heard. The whole YouTube world still is kinda new to Japan and to businesses over there because they don’t really understand the use of it like we do out west. Like it’s hard to even find some popular Japanese music and music videos because their music industry still hasn’t taken advantage of the internet quite yet and you can only find it through services you can officially only buy it from.

Nintendo isn't stupid though. Consumers are.

Nintendo is a well run company that makes tons of money, and maintains a huge audience for every release they make. The Switch is one of the biggest selling consoles of all time.

Consumers are the idiots that don't punish them for their anti consumer policies. Nintendo is doing just fine without selling a soundtrack album.

Nintendo just doesn't give a shit about their fans.

Nintendo knows exactly what their fans say they want.

Nintendo also knows exactly what their fans will pay for.

The people who make the games and the people who sell them are different groups. We can love one and not the other.

Thats where i draw the line. I could give them 60 for a game, but im not going to pay all thst for the same mario 64.

Also Chrono Cross getting a remaster before CHRONO TRIGGER.

Only 1 of those 3 games are from Nintendo though.

Nintendo has been squandering so much good will during this pandemic. I used to be a Nintendo fan boy, and now I hold them in the same level of contempt as I do Epic and EA.

Nintendo just doesn't give a shit about their fans.

Welcome to being a fan of anything from japan.

There's an old quote.
“Any idiot can build a bridge that stands, but it takes an engineer to build a bridge that barely stands.”
That's pretty much what these modern conglomerates are. They are the engineers that can barely build a game that people gobble up time and time again.

They put 170 of their music tracks into Super Mario 3D All-Stars. Oh, right, that was a limited time in-game port thing.

They had quite a few songs in Super Smash Bros Ultimate as well.

Thats what this meme is about. A playlist containing every song in smash got deleted off youtube

And the average Nintendo consumer has the money to spend. Not all but generally it’s more broad spectrum than other consoles across ages and other demographics.

And then there was Koichi Sugiyama (the Componist for the Dragon Quest Series) who more or less did both at the same time.

He was really defensive about putting Orchestral Versions of the Soundtracks into the Games for the express purpose of selling those BECAUSE he had the Copyright and just wanted more royalties from the Sales.

nah, he was quite the scumbag. Part of the lack of orchestral stuff was also fan preciousness of the series. The JP version of DQ8 had no arranged music, just the OG midi tunes, at least by default. The intl release had the full score and I have no idea who in their right mind would prefer the midi versions. That main theme is just perfection when orchestrated.

However, in the intervening years Sugiyama time and again blocked any of his music from streaming platforms and was an all around garbage bag of a human. Fantastic composer, awful human being. Sucks.

E: I forgot that he had passed away, so I changed some tenses. I will also add that despite my intense dislike of his social opinions, the industry did lose a truly great composer, which is sad.

They have the whimsy of Santa and the soulless, mean spiritied, pointless greed of Scrooge.l at the same time.

Nintendo is probably one of the most out of touch video game companies, especially amongst the console creators. Even when they decide to do something for once it’s done in a completely awful way (NSO+their horrible ports, cloud saves, etc)

For too long they haven’t really felt the need to compete against others because their IPs have such a hold on people that they know people will always buy their stuff because of Mario, Pokemon, and Zelda

I mean Mario Odyssey and Breath of the Wild were the last two main titles in their series and both are rightfully regarded as instant-classics.

So they seem to be in touch

no kidding. where is the n64 mini? nes and snes mini were massive hits one would think its only logical to keep that money train rolling but no... nothing is even announced in that camp. i dont get it.

I don't personally give a damn about mini consoles, but why the fuck hasn't Nintendo put their whole fucking library on the Switch's online subscription?

You talking about the classic? Pisses me off that the NES and SNES Classic were limited run and now discontinued. I would totally buy both if they were still available but instead I would have to spend 3x the MSRP buying it on eBay.

Interestingly enough, game music seems to be the least claimed type of music on youtube

I uploaded videos 10+ years ago of me playing video game music (not too well either) and still get random views and comments occasionally. It's quite nice. They were just so I could go back and listen since I don't always keep up with practice or remember how to play certain songs.

I meant like. Copyright claimed. I think it’s because of the huge amount of let’s players. If they copyright strike every use of their game music. Let’s plays would disappear

Other companies are seeing the potential. Give it time friend. It must happen eventually, right?

Or just rip files and get what you want now. If they won't sell it to you, you can get it other ways.

The joke is that the same audience keeps moaning and making memes instead of not buying a shitty company's products.

They know exactly what their audience wants, they just make enough money off of them that they can ignore their wants. Nintendo fans mostly are not going to be going anywhere anytime soon. What they're getting on Nintendo can't exactly be reproduced on either Xbox or PlayStation, or even PC, and Nintendo knows this.

Sp they even copyrighted the sound of my exhale.mp4 file I own? Damn

Strangely enough, they used to sell ost’s on cd from the official Nintendo Power store back in the 00’s.