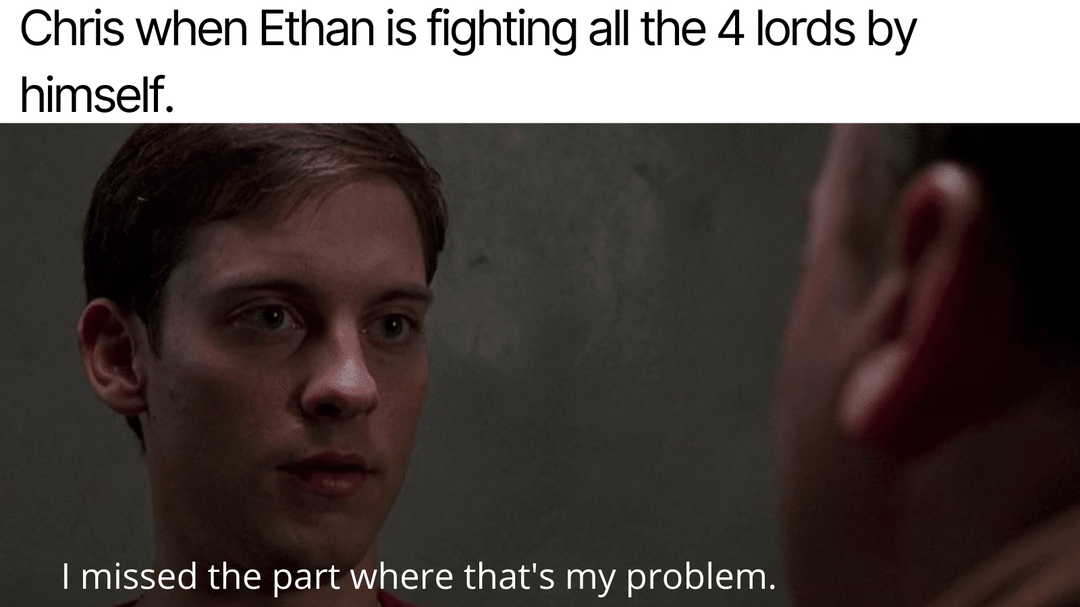 Building the tank for ethan to stay under the radar.

You mean the most over the top, ridiculously stupid, no reason to have it, awesome boss fight moment? Moment went from jumping the shark, to alright, it's bad ass, but still stupid. Sometimes you just have to embrace the cheese.

I knew whats coming when i saw it and made me laugh but i embraced it. I didnt except but loved it. No matter how dumb it was.

Still a pity that Heisenberg doesn’t have a proper confrontation

He was playing Raid Shadow Legends on his mobile device

“Hey guys, on this operation we’re going to be killing Mother Miranda! But first I’m going to tell you guys about this operation’s sponsor! Today's operation is sponsored by Raid Shadow Legends, one of the biggest mobile role-playing games of 2021 and it's totally free! Currently almost 10 million users have joined Raid over the last six months, and it's one of the most impressive games in its class with detailed models, environments and smooth 60 frames per second animations! All the champions in the game can be customized with unique gear that changes your strategic buffs and abilities! The dungeon bosses have some ridiculous skills of their own and figuring out the perfect party and strategy to overtake them's a lot of fun! Currently with over 300,000 reviews, Raid has almost a perfect score on the Play Store! The community is growing fast and the highly anticipated new faction wars feature is now live, you might even find my squad out there in the arena! It's easier to start now than ever with rates program for new players you get a new daily login reward for the first 90 days that you play in the game! So what are you waiting for? Go to the video description, click on the special links and you'll get 50,000 silver and a free epic champion as part of the new player program to start your journey! Good luck and I'll see you there! Now back to killing Mother Miranda”!

Installing gaming laptops around the village, as far as I could tell

This church looks like it could use some gaming

We need a DLC about Chris and his squad.

Yeah that's what I'm hoping we get

If we only get one story dlc, I'd rather play as a villager or villager made to serve big mommy. Though I'd prefer both that and Chris.

i feel like that part of the story was handled really poorly. what reason would chris have not to tell ethan, besides “i don’t want to get civilians involved”. him doing that got ethan killed in the process anyway so i never understood the plan that chris had.

His own teammates call it out, which makes me wonder why the writers would add that in. Literally all chris had to say was “this isn’t Mia” and could have saved SO much time lmao but I think the writers did this to show that chris is both jaded and so determined to stopping bio terrorism that he thinks if even one person can ruin his operation he’ll cut ties regardless if it’s negligent or not.

I can understand Chris initially not telling Ethan at the start, because there was a possibility Ethan had been compromised by Miranda’s influence. He is also correct later that telling Ethan the plan would make him want to be involved and Chris just opted to leave him mad for a bit instead of eager to join the action.

So I can buy that part.

The problem is how Capcom handle it later on, when they meet at the reservoir Chris should have told Ethan then…but if he did, they wouldn’t have their big reveal later on and it would reveal Chris as a good guy after all. He looks like he is about to tell him, just before the BOW attack, but it’s obvious that Chris is acting needlessly vague and dickish to Ethan during that encounter just because Capcom have their plan, and not for any logical reason.

As for Chris’s team calling him out, that’s obvious, it’s because Capcom think showing awareness to something they know players will question, it lets them off the hook for poor writing.

To be fair to Chris, he didn't lose most-to-all his team this time and in fact suffered zero casualties from then so, Ethan aside, he must have done something right this time

Yeah the whole Miranda was your wife thing and we didn't want to tell you. I mean, really? Ethan literally saw some nasty shit in RE7. I think he can handle the, your wife was Mother Miranda.

Does nobody pay attention to the cutscenes?! Why does it seem like I’m the only one who heard chris say “knowing Miranda COULD HAVE INFECTED ETHAN, we went in by force”

They meant when they met in the village

i know that but after that he had the chance to tell him. like at the beginning of the game after the car crash. they really couldn’t have filled ethan in via the phone?

One more reason to love Chris, he sealed the deal to finally end Ethan's story for good.

It's also frustrating because it feels like something they could have easily resolved through just a little more dialog. Specifically:

We know mold is a corrupting influence, with mind control and whatnot. It's a pretty easy "out" that Chris would think Ethan is compromised and being controlled by Mother Miranda. And likewise, on the flipside, I think the game could have done more to make it seem like Chris was under control of the mold (even though he wasn't), which in turn would have worked as a means of handwaving him just "killing" Mia out of the blue. Having Ethan and Chris distrust each other because each thinks the other is being controlled by Miranda is a super easy way to fix a lot of the plot issues.

ima just pretend that everything you said is canon

Chris’ insertion operation makes no sense. He’s already in the village between the church and cave bases, and him running into Ethan by the lake. Yet his team who has left a bunch of their gear behind and who are openly running around the village surprise Miranda? Why the big late night operation you play through as him when story-wise Chris hasn’t been impeded at all towards finding the mold source? It’s weird stakes and a plot hole.

I’m assuming there will be some DLC developed about it

He was being old, and tired.

Plot contrivance, that's what he is doing. Chris frustrates me in this game, he is just being a butt for no reason. I'm glad that the game at least acknowledge this later on, Chris keeping secrets tends to get people around him in danger.

Begging Leon to bang his sister

I always thought the reason that Chris didn’t tell Ethan anything was in case he had already been infected and compromised by Miranda, which she certainly had plenty of opportunity to do while posing as Mia (of course, Chris didn’t know that Ethan was already a mold man). Likely Chris kept Ethan in the dark to keep Miranda from finding out they were planning to kill her, and would have told him everything once he and Rose were both safe back at their HQ, but of course, things didn’t turn out that way. That being said, Chris had no excuse not to tell Ethan everything once they met up again at the reservoir, since not only should it have been clear by that point that Ethan wasn’t Miranda’s puppet, but they were a little bit past the point of not getting Ethan involved. I suppose one could argue that Moreau attacked before Chris had the chance to explain anything but he still wasn’t exactly forthcoming when Ethan met him again in Heisenberg’s factory, so it doesn’t seem likely that was ever his intention.

Yes I know he barely helps or acknowledges Ethan on what's going or even bothers to help him in the whole game and by the time he died Chris said "I know I should've told him" like hey asshole you killed my wife and my daughter is kidnapped, why couldn't you help a father out, especially after Re7 biohazard.Village's writing is horrible

I wouldn't help a guy whose face is never shown.

i don't think chris contemplated facing them all

ethan had to because of her daughter.

let's be real, probably ethan made them change plans multiple times and that's why he didnt want to get him involved to begin with.

the only weird part was when you find him during the morau part, but my speculation is that they picked the dumbest one zone to secure the best route.

Ethan "I'm going to find my daughter, where the hell is Chris?

I'm still convinced if Chris actually told Ethan what was going on from the start, the whole game could have been avoided.

Probably crying over piers or maybe trying to get the boulder to forgive him? Who knows

With how little they did with the villians anyway and the open world, the game as it is shouldn't really be as linear as it is