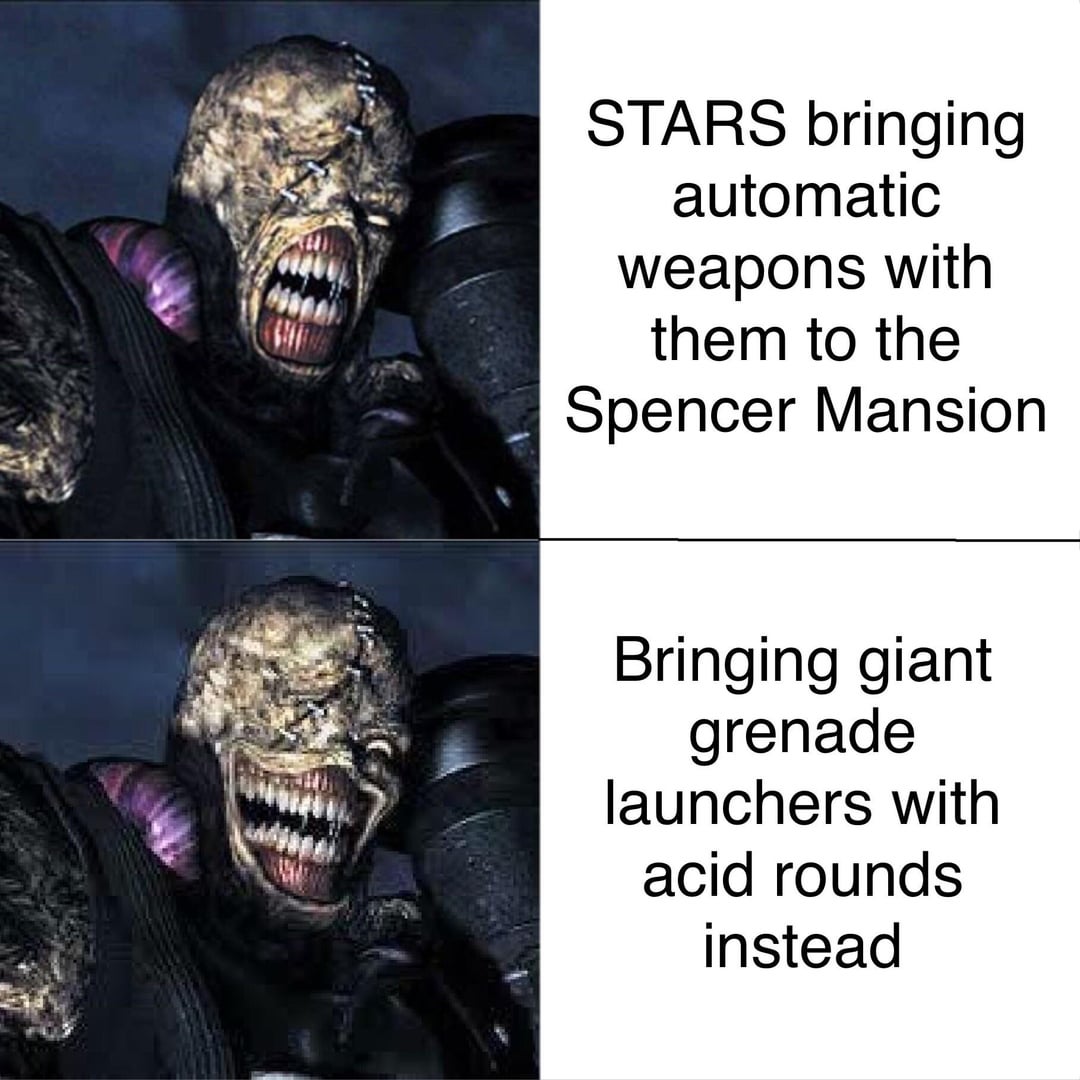 Nemesis smiling is more terrifying than him not.

It gives the feel that... His jaw and mandible never end...

thats what i came here to say, got the heebies just looking at that pic

I've heard it is escacially powerful against living things.

But who really needs it when you have THIS?

It IS an American police station…

No one needs to see more Nemesis gum

You know what's even more fucked up than the grenade launcher?

The rocket launcher Brad drops for you during the Tyrant fight is a model of rocket launcher called an M202 FLASH, an acronym for "Flame Assault SHoulder". As the awkwardly shoehorned acronym would indicate, the M202 was a delivery system for incendiary rockets designed to function in a similar manner to flamethrowers without having to get dangerously close to an entrenched enemy to burn them alive.

So what in the name of God is a police agency planning to use that for?

Jill- "You mustn't be afraid to dream a little bigger, darling."

I always wondered: do acid rounds for grenade launchers exist?

If I had to rationalize, I'd say the acid/flame rounds found in the mansion were for handling potential BOW escapes, and the flame rounds in the RPD were there in case Wesker or Irons needed them for a similar reason (since they knew of Umbrella's activities).

They also have a guy with a mortar...why exactly?

But they're still a Special Tactics and Rescue Squad. They could've had some cases in the city where they had to rescue a hostage.

just fucking sprays the criminal and hostage both with acid HOSTAGE RESCUED!

Overly militarized police, just one more uncomfortable parallel between the world of Resident Evil and our own.

From what I've heard. American police are the most militarized police in the world and grenade launchers probably aren't unusual.

I wouldn't go that far, and I'm a big opponent of the militarization of police in America. Brazil and Russia both have us beat, and the Turkish police have attack helicopters for chrissake.

Was about to say. Brazil's BOPE is scary.

Smoke and tear gas I get, maybe even explosives, but acid and fire?

It's possible that the Acid and Flame rounds were found IN the Mansion. Probbably made by Umbrella to combat any escaped B.O.Ws

Given Barry's reaction in the original game when he hands a box of acid rounds to Jill it would suggest he found them in the Mansion and they were part of Umbrellas arsenal to deal with BOWs, it looks as if it wasn't routine STARS weaponry.

I have no idea why Forest has explosives grenades loaded up on a search and rescue mission unless of course he found the grenade launcher in the mansion on a downed Umbrella Security Official (you know the ones you never see in the original game that they didn't bother to correct in the remake either.)

All in all they went in fairly ill equipped considering they were investigating on the face of it was a crazed religious cult of cannibals murdering people in the remote areas of Arklay County. One shotgun and sidearms consisting of 9mm pistols and Barry's 357 Magnum revolver? In the mid 90s you'd expect such a unit to have access to MP5s or old US surplus semi-auto carbines such as the M1 Carbine, failing that a Ruger Mini 14 for police use...

As for the FLASH Launcher dropped at the end of the game by Brad I seem to remember that was seized from a criminal gang in a raid STARS was involved in, why it was on the helicopter and not in evidence lock up is anyone's guess.

Realistically however STARS was really ill conceived as an organisation in the early game and its legacy has stuck with it, it's meant to be a SWAT team but practically seems to be geared more towards search and rescue with some military special forces guff thrown in for good measure (the splash screen on the original games intro has dog tags visible which isn't to my knowledge standard issue in US Police forces.)

It's a very Japanese developers take on what a special forces/SWAT unit in the US would be like.

This comment right here is why people shouldn’t believe everything they see in movies. No the police don’t have grenade launchers, some departments may have teargas launchers which are typically made to only accept specially made teargas canisters.