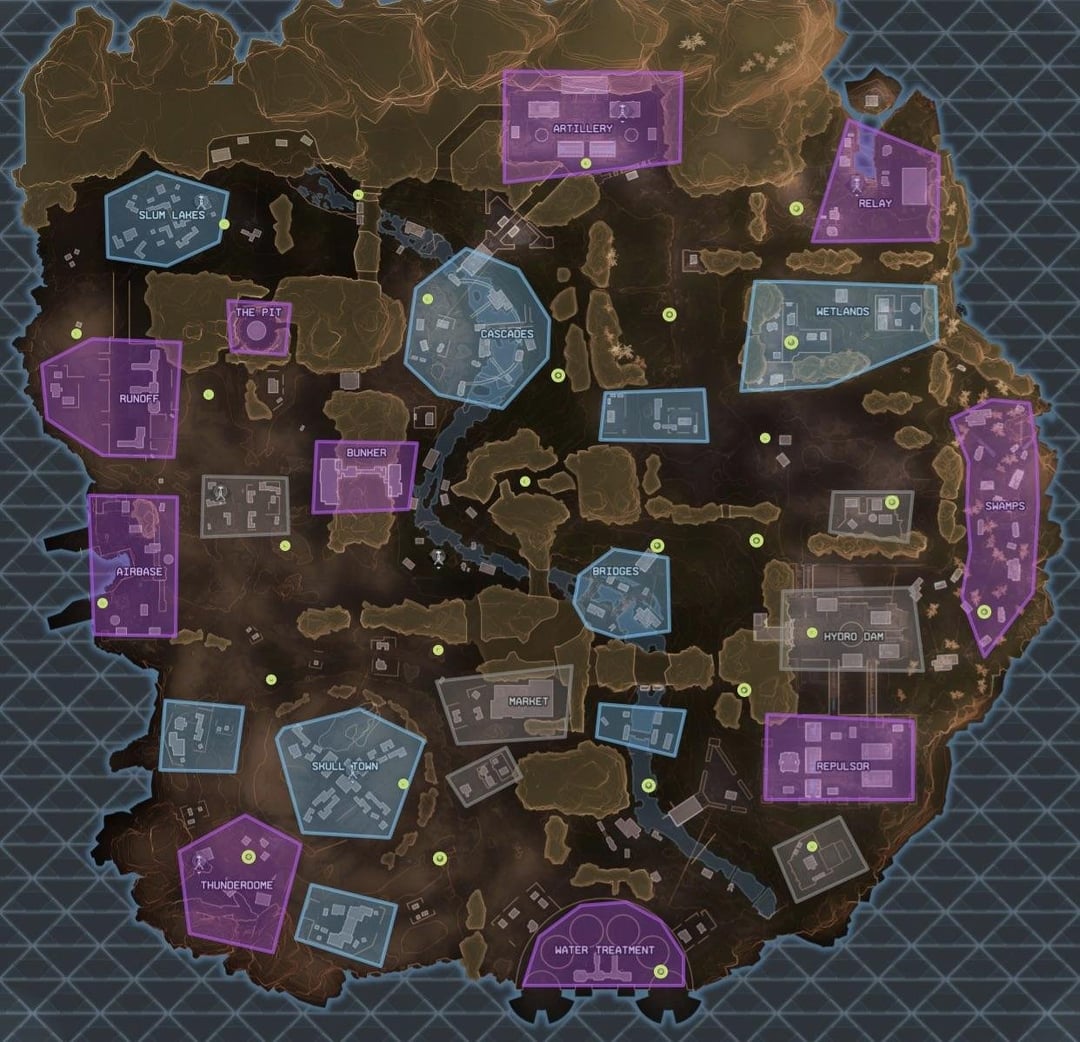 With this map we can see how the loot is placed over the whole map, but what are your favourite landing zones?

While this can change depending on the flight path of the dropship, there are still some questions to consider:

do any of you avoid the purple zones for the blue zones (or even the grey zones!), knowing you can easily pick up the essentials and get the rest from your dead enemies?

barring the "hot" circle each map, which seems to guarantee a gold item, where do you notice are the continually popular places for players to go?

where are the best quiet areas when you want to keep your head down until the last six or so?

For hot dropping, skull town, blue zone, or anything big close to the beginning of drop will do just fine. Bunker works as well, but there is a small amount of loot there, so it feels more like a roll of a dice/rat race than anything, which isn't as fun for me.

For quiet drops, my favorite is hitting runoff and doing a quick run through of the north half and then beelining for the pit. I find there is purple armor in the pit like 1/2 of the time. Between those two zones, my team is usually well equipped enough quickly to head over to the river valley or bunker and try and pick up a few kills.

If we're frustrated and the drop angle works for this, sometimes we drop at Relay and do a very slow move inwards. Depending on the circle and other factors, sometimes it's possible to loot relay, wetlands, and swamp before seeing another soul, which can be nice for a more chill game.

Other favorite zones that are usually hot or medium spiciness are thunderdome and repulsor. Both have decent loot and isn't too spread out. I find purple armour or a pheonix kit under the cage at thunderdome often, and the 'tunnels' under the hangers at repulsor usually have a decent gun or two. Both areas have great paths adjacent areas as well.

you have taken the phrase "Be the change you want to see" and personified it - thanks mate, great post.

Shhhh don't give up the pit secrets

The most popular drop spot is what ever is directly under the ship at the moment the countdown hits "0."

As for me, If I can reasonably get to the supply ship I prefer to go there get a gun and a kill and then bail.

If the supply ship path is too far from the drop path then I choose the 2nd closest of the purple zones. I don't like to go to THE HOTTEST drop, but I like to get some early action.

Ignoring conditions of drop ship pathing, Airbase is my favorite location, and Relay is my second favorite. With Water Treatment and Thunderdome rounding out the top picks.

I feel like Skulltown, Bunker and Artillery are really popular overall, with Repulso

r/Dam
getting popular if the drop path starts in that area.

The quietest games I've had are usually at Relay or whatever Zone is at the end of the drop path. If you wait to be the last group to leave the ship, you hit the ground and 4 squads are already dead, but you can still loot your area before anyone arrives on foot. Then if you take them out and follow their tracks backwards you usually make it to the third ring without seeing much activity and it's down to 6 squads or less.

Thunder dome is undoubtedly the best landing spot , almost in all the times I play this rare items drop point is completely ignored by everyone (even my teammates) because most players are ignorant and drop in skull town (can someone explain why people rather dropping there and not in thunder dome?).

People like to drop in skull town because they have lots of cover, basically its a simple place to drop where you can take the game in a modular fashion. That can be hard to understand but basically its like you drop in skull town and know there is lots of loot, items in each small room. you can fight people largely 1 on 1 in a small room and escape people. So that makes your fights modular. The problem of course its its mid teir loot and too many people want to do the same thing. So you end up fighting 2-5 squads over mid tier loot.

One other thing, you have to realize most players cant run this game very fast at any decent settings. So places that can increase your fps or keep you close quarters like bunker and skull town are nice for anyone who doesnt have a top end system.

I find thunder dome pretty weak for kitting out three players tbh, it's not my favourite drop point. Skull Town has lots of variety and though it doesn't contain much purple, usually all three can get their hands on a decent gun or two (but I avoid it mostly because I agree with you).

where do you notice are the continually popular places for players to go?

Skull Town, Bunker, Artillery, and Airship always have people dropping there. The former 2 due to guaranteeing quick action, the latter 2 seem to be well-known for high tier loot.

Besides that, whatever's close to the dropship as soon as the counter hits 0 is popular, especially the Supply Ship if it's close. Our squad once even had one hotspot to ourselves since it was so far away from the dropship and nobody could/would make it all the way out there.

where are the best quiet areas when you want to keep your head down until the last six or so?

In the same vein, waiting til the end of the dropship's flight will give you the pick of where to land. In general, I've noticed Relay, Runoff, and Water Treatment are unpopular spots unless the dropship is close.

For me my favourite drop/ route (depending on the carrier, 90% of the time I drop hot) goes: Airbase> run off >(maybe the pit)>grey in-between bunker>bunker> where ever we hear gunshots exiting bunker.

Airbase can get really hot but I always try to land in the corner where there are 2 rooms 2 bins and a ship so all 3 of us can get something. Get rushed from the runway but we have positional advantage. Try to clear airbase of enemies than make our way to run off, loot that to bits. If we are not all happy with our loot we will go the pit to complete loadouts then rotate to bunker or the grey bit between. Then through bunker to the sounds of gunshots.

Yeah this is a solid strategy. The last few days I've jumped with so many randoms that don't know the good loot areas and we end up with white outfits and lucky to get three decent guns between us, whereas the above usually sees everyone happily outfitted.