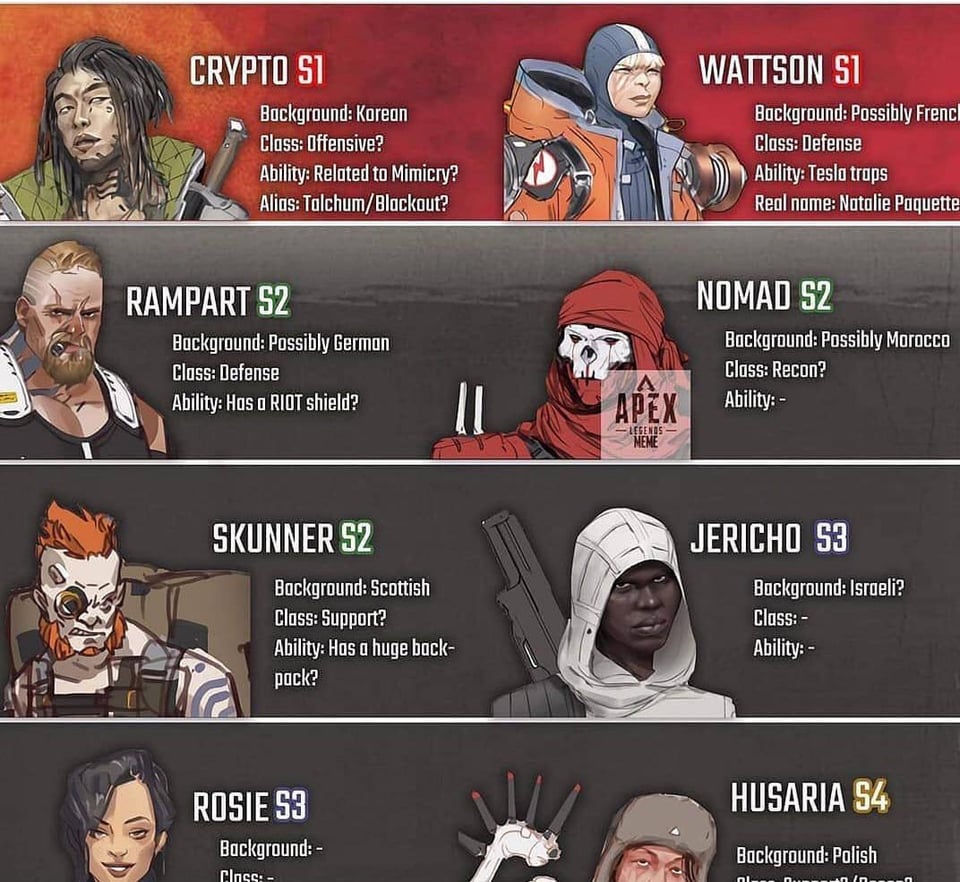 Oof, that Wattson has seen some better days.

I know a guy that went full ape. It didn’t end well

That’s the old Nea model from dead by daylight tbh

There are tons of articles from 2019

Rosie(again this is the name before Loba) VERY early mentioned of SEER, Rampart and some correct details on Rampart even, etc:

There are plenty of more online. Those two include images as well. Pay attention, as even those super early leaks from 2019 may prove to be informative on something still yet to come in Apex Legends.

Some of those are insanely op lol

I remember seeing these back in the day and being like

'Woah, this is insane. There's no way that they'll add more than one ability for tac, pass, ult!'

Jokes on you, old Seer was weaker.

"Ability: has a huge backpack?"

Honestly looks like a terrible early concept of Fuse... but he could still be a unique legend that just carries more loot than regular...

Wot makes me a good demoman?

What about fuse is surly? He's like the happiest guy in the games

I think datamined abilities for skunner were for barricades and floor traps that slow people walking through them.

Maybe the barricades turned into ramparts a-wall and everything else was scrapped?

Crypto is the dealer.

He's definitely crashed on a few couches in between jobs.

This image is wrong. Names and concepts arts are mixed.

Seer codename's was Pariah (and probably Firebug before that).

Can I get the full image

I will try to find one. But this is the only one i have atm.

Ngl having a Polish legend would be great, listening them say phrases in your native language

would be saying chuj and kurwa like others use punctuation

You'll just be as disapointed as we swedes were when we got the "swedish" Torbjörn in Overwatch.

I mean Wattson VA is American. She only had the accent

Hearing Bloodhound speaking old norse for the first time caught me off gaurd at first. As someone from Iceland it was great to hear an older version of my language being so ingrained into a major video game, but there where a few phrases that I found quite odd, as in they either were different words or just didn’t fit together.

I think as well that since they are part of a future society the language might change a bit.

Either way one of the many reasons why I main Bloodhound is to hear them talk. Fight, vinna, fight again

I'm still jaded towards polish characters in english centric games since Ela and Zofia from Rainbow 6, they just google translated some stuff and called it a day.

I remember seeing these from some Instagram page. I always wished Crypt had the original concept as a skin because I thought it was really cool. Also that Jericho look is what people thought Seer was going to be just a few weeks ago which is hilarious to me

jericho looks like my uncle, who the hell thought he was israeli lol

probably a guess based on his name, y'know with the walls of Jericho and all that

Could have Ethiopian Jewish ancestry who immigrated if one were to guess.

I've picked up on some stuff from

r/ApexUncovered
like most of these names are wrong or mis-matched, although easily mistaken.

I'm not an expert in this, but this is what I've gathered

"Rampart" is actually Jericho, who did actually have a riot shield.

"Nomad" is actually the guy labeled Skunner, his kit was supposed to be crafting based, but was scrapped and turned into the Replicator mechanic. Also super unsure about this but Rev's OG name was Blackout.

"Jericho" is actually Skunner, it's believe this was an early as hell design of Seer, who at one point his kit was based around sniping.

"Rosie" is Loba. Nothing wrong just a name change.

Like I said this stuff gets confused one way or another all the time. If a leaked character thread is on that sub usually at least one comment will have a correction.